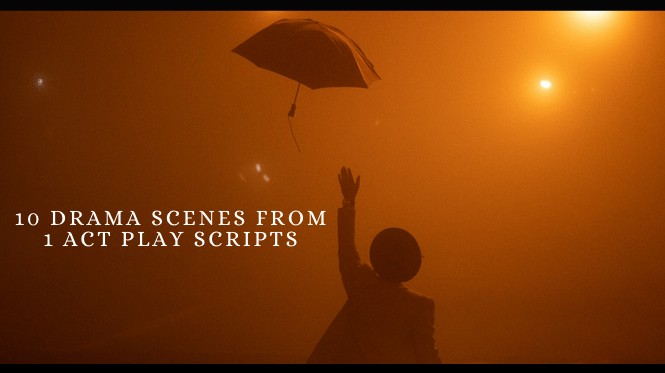 10 Drama Scenes from 1 Act Play Scripts for two actors. Each play also comes with a dramatic monologue for one of the characters.

HOLDING ON TO TIME
Morris has only recently lost his wife and business and his daughter visits him to be there for him and to try to improve their own relationship as father/daughter.

NIGHT OF THE PARTY
Ronon doesn’t want to go out to an event and his wife refuses to allow him to keep them indoors.  All hell breaks loose.

BETTER DAYS
Karen runs a small motel and has run out of patience with customer Miles who never keeps up with paying his bills.

FEVER DREAM
Reggie stops off in a bar to yet again delay visiting her father in the hospital.  During this time she strikes up a friendly conversation with the bartender who gives her surprising advice.

SCRATCHING THE SURFACE
A pair of lovers rekindle their relationship for a night and make new discoveries about one another.

SINGLE HAPPY MOMENT
Doug and Priscilla are hiding out in a hotel waiting til morning so they can board a ship heading to France hoping to escape a hit man that’s after them.

LOVE IS A STRONG WORD
Martin visits his girlfriend Mischa at college and gets the surprise of his life.

NOTHIN’ BUT GOOD THINGS
Dunston and Betty Sue are former lovers who haven’t seen one another in years, until Betty Sue comes back home to town after a failed music career.

THE OTHER HALF OF MADELINE
Luke asks his mother Madeline to tell him the truth of how his infant baby sister died years ago.

FOUR SUMMERS AGO
After years have gone by two sisters come together to try to come to grips with their differences.