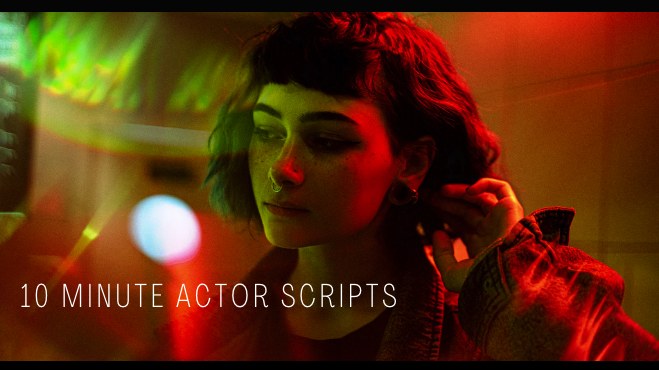 10 Minute Actor Scripts is a collection of acting material for two actors which can also be found in our script section.

CHEESECAKE
A hit woman gives an ultimatum to a man who needs to provide her with a list of names.

TEA TIME
A comedic spin on old English paired up with modern English and the result of of that mash up.

CRUEL JOKE
Two local criminals warm themselves to a fire while waiting for information regarding their next payday.

FRESH AIR
A lighthearted comedy of an old friendship that may have the beginning of a love interest.

HAROLD’S EAR
A niece does her best to help her uncle remove a cotton ball stuck within his ear.

PERFECT LITTLE BUBBLE
A first time ‘episode’ has transpired with Roxy, the woman that Harper has planned to propose to.  They now exist in its aftermath with the overriding agenda of what will happen next.

LIFE MOVES
A father tries to come to terms with the fact that his daughter is growing up.

STORY OF A PLUCKED LOBSTER
Waltong’s wife is dying and to make matters worse, they pair is stuck in a cabin in the mountains during the snow storm.

EVEN THIS
A teenager tries to convince his mother on a path of borrowing money so that they don’t get evicted from their home.

DISTANCE BETWEEN US
A father and daughter meet in order to try to see if they can work out their issues.