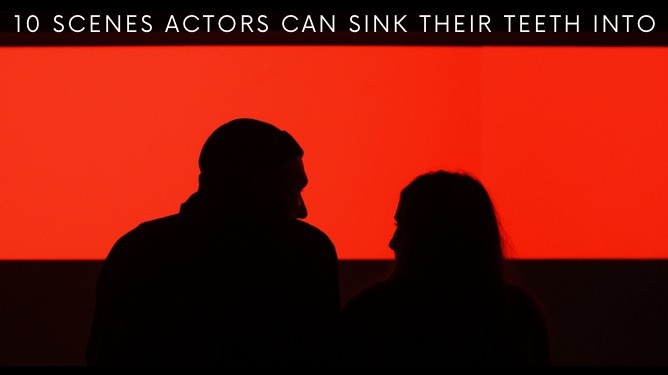 10 Scenes Actors Can Sink Their Teeth Into shares 10 short snippets from MB’s short play scripts that you may use for your creative needs.

All plays below are previewed one acts that take place in a single location and have minimal characters.  The running time for each piece runs about ten minutes in duration.

10 Scenes Actors Can Sink Their Teeth Into

“I invested in France.”  –Leon’s line from the serio-comedy play, DRINKS ON THE HOUSE
A distant father unexpectedly visits his daughter’s apartment where he delivers terrible news.

“He goes on these tirades.”   –Lester’s line from the comedy play, TIRADES OF PUPEYE
Lester owns and runs a pub in Ireland and he does his absolute best to take care of those under his employment.  That especially counts for Pupeye, making sure he receives his daily dose of medication and some which creates robust intellectual discussion instead of wild behavior.

“Why you in so much pain?”   –Karen’s line from the serio-comedy play, BETTER DAYS
Miles is a room renter who wishes to go to his room and get much needed rest.  Karen is the board manager who won’t allow him entry to his room until he pays his bill.

“Maybe there’s beauty in self-sacrifice.”  –Reggie’s line from the drama play, FEVER DREAM
Reggie’s father is sick in the hospital.  She’s never had a great relationship with him and finds it nearly impossible to go visit him.  She stops at a nearby bar and talks with the bartender.

“Have you written anything else?”  –Nicky’s line from the comedy play, FISHIN’ FOR MISERY
A filmmaker is down on his luck with no career prospects in sight and his friend tries to cheer him up and look on the brighter side.

“I need a drink.”  –Tara’s line from the comedy play, LUNCH WITH THE ENEMY
Tara is extremely upset over the notion that her co-working buddy is going out on a date with a co-working enemy.

“We’ve tried everything, haven’t we?”  –Lyndon’s line from the period drama play, A SHADE OR TWO DARKER
Lyndon and his wife Gertrude try to figure out how they can avoid a fallout with their son Lion but it may already be too late to keep the family together.

“You don’t love me anymore?”  –Mickey’s line from the serio-comedy play, NO IS BETTER THAN SILENCE
Kyra upped and left Mickey.  She’s gotten her own place and establishing her own independent life but Mickey doesn’t wish for things to end.

“You always get headaches when we talk past a third grade level.”  –Dan’s line from the play, THE LAST M&M SAMURAI
Dan has an odd philosophy when it comes to eating M&M’s and he reveals his concept and loyalty to the last peanut in the bag.