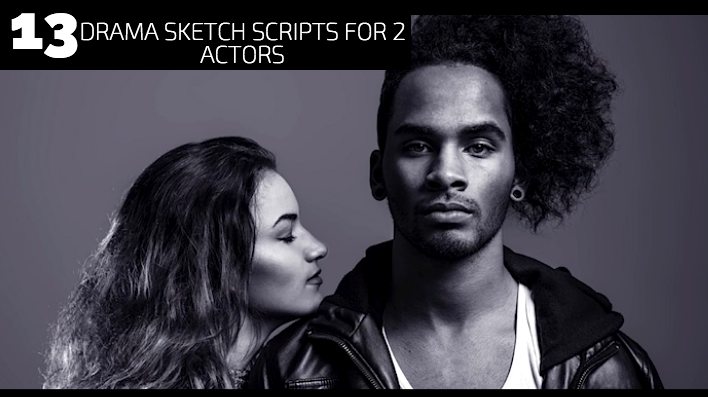 13 Drama Sketch Scripts for 2 Actors are scenes taking place between 1 woman and 1 man.   Subjects include money, love and grief.

WISDOM OF THE FOOL
Hal is experiencing a personal crises and his wife does her best to help him figure it out.

BACK TO LIFE
This scene reveals a couple who aren’t dating but are dealing with the aftermath of a difficult decision during the 1950’s.

DIAPER DIAMONDS
Dan panics when he can’t seem to find the diamonds he his in one of his baby’s diapers.

MATCH MADE IN HEAVEN
A pair of lover’s who come to terms with Mick’s first time vulnerability with his girlfriend.

DEVIL IN MAN’S EYE
Marv has swung by his neighbor Patty’s house in secret in order to borrow much needed money from her to take care of the shambles in his life.

C4 & D29
We are in the future in a society that only has fragments of what we are used to today.  Different laws create different drama between this husband and wife.

THE UNTOLD STORIES OF PADGETT XARLES
Padgett is the master mind behind a secret society where people get to carry out their fantasies with strangers for an undisclosed some of money.

STORY OF A PLUCKED LOBSTER
A husband does all that he can for his dying wife while they remain stuck on a snowy mountaintop without any source of communication for help.

TRASH TALK
After dating Tina for a couple of months Silene is already having major doubts about their relationship and compatibility.

DISTANCE BETWEEN US
A father and daughter try to come face to face with the problems they’ve had throughout the years but as it turns out, worse news is riding beneath the surface.

CHICKEN CUTLET SANDWICH AND SOME WINGS
Two teens who happen to be the greatest of friends come from different financial family’s.  One has a darker aspect that deals with money struggle and abuse, while the other comes from the style of old Americana.

TRUE BLOOD TIES
This is a scene where a daughter visits her criminal father in prison and although the contact remains behind bars, family drama still permeates within this relationship.

JUMP OFF THE EARTH
All Beverly wants to do is swim through space in the cold quiet and smile.  Unfortunately, she’s lives at home with her hubbie Judd who is in left field about her ancient needs.