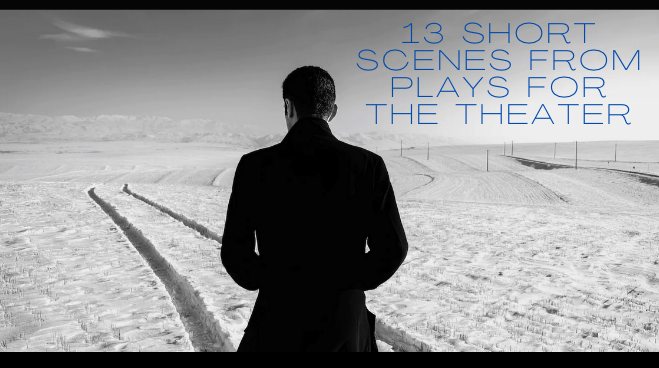 13 Short Scenes from Plays for the Theater provides theatermakers with scenes from 1 acts that may be used for drama school and auditions.

13 Short Scenes from Plays for the Theater

“I’m willing to die for you.” from ACT OF PURE LOVE
A dark dramedy about a guy named Saul who offers up a piece of himself as an offering for forgiveness to the woman he loves.

“Why waste time being with someone else?” from ROUGH AROUND THE EDGES
Shelly talks to her boyfriend about why it’s important for her to get a tattoo.

“Be calm cause she’s sensitive.” from TINA, HANK, HANK, TINA
Hank arrives at a beach location designated by his brother because he is in dire circumstances.

“I know you well enough to know you’re a decent human being.” from WINTER WILL NEVER END
Jason is beside himself as the woman of his dreams gets married off to another man.

“I dove through a second floor window.” from BEFORE THE NIGHT BLOWS COLD
Billy arrives on his ex-girlfriend Azumi’s doorstep because people are after him that mean him harm but Azumi isn’t so pleased with the idea of helping Billy.

“You’re too stupid to go to Naples.” from THE WOEBEGONE
Lex and Ray are desperate to sell their camera lenses so they can raise money to survive another day.

“Why wasn’t I ever good enough in your eyes Luca?”  from RIGHT BETWEEN THE EYES
Luca visits his cousin in hiding in order to make room for his escape but Gio wishes to stay and fight the men that are coming after him.

“I’m not throwing you anywhere.”  from THE ECHOES OF OUR EXISTENCE
Seanna challenges Hoppers intellect and manhood due to his lack of desire to commit to their affair.

“Out there in the wild, safe from responsibility.” from THE HANDLE OF THE BLADE
King Larneth engages in talks with his most trusted knight and admits that he has a son no one else knows about.

“We’ve tried everything, haven’t we?”  from A SHADE OR TWO DARKER
Lion is fed up with his parents delusion and lack of admittance when it comes to race within their small family unit.

“It’s a quiet place to chat.”  from THEM CANDLES
Darla doesn’t want her unhealthy daughter Kendra to go out meeting a guy but Kendra isn’t going to let anyone stop her from being who she wants to be.

“I was sent away cause I did some bad things.” from AT THE END OF THE DRIVEWAY
Jagger is fresh out of jail and goes straight to see his son for the first time but the boy’s mother Margaret isn’t an easy wall to get passed.

“You make me feel non-existent.” from JEF
Landia explains to her humanoid Jef that they can no longer be together.