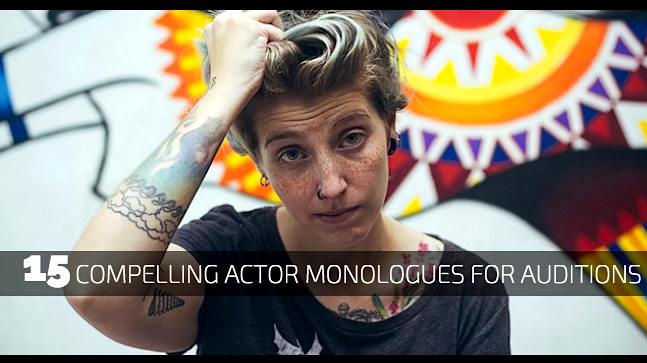 Lend your acting talent on 15 Compelling Actor Monologues for Auditions with topics on dating, materialism, honor, betrayal, anger and anxiety.

CHECKING IN
Rob locates his biological father after 16 years of not seeing him.

LAND OF THE FORGOTTEN
George is a homeless man who was once a prominent architect.  He meets a stranger named Kim in Central Park, who also happens to be an up and coming architect.

HULLABALOO
Maggie and her friend Dun discuss whether or not to send Maggie’s son Michael to the academy.

AT THE PARTY
Tom feels personally satisfied with getting revenge at a family member during a party but later finds out bad news that guilts him.

TREAT ME NICE
Corinne’s mother isn’t well and although Corinne has been taking care of her mother day and night, she doesn’t seem to get any respect for her efforts.

STAY THE NIGHT
Wilkin invites Amanda to his apartment from time to time but when she tries to get him to talk about his life, he gives her a story she didn’t expect to hear.

NO HARM NO FOUL
Cuddy mourns the loss of his best friend at a funeral parlor.

SAND ANGELS
Lenora feels as though her life was meant for nothing and she talks to her boyfriend about her problem.

NO IS BETTER THAN SILENCE
A young couple breaking up and making up and everything in between.

RAY RAY’S STORYBOOK
Marlo rants to his girlfriend about how he’s always getting his cousin out of trouble.

DIE DOWN
Sheila and her father stopped talking but her boyfriend tries to reconnect them.

MORE WAYS THAN ONE
Porterfield is a bad ass teenager always making mayhem at his school with the other students but his principal may be able to make a difference in his life by setting him on a different track.

EVEN THE COLOR BLUE
Johan wishes to come out with his parents but he learns of terrible news regarding the health of his father that turns everything around and puts more strain on his family.

DOWN FOR THE CAUSE
When Joselly expresses her unhappiness to her boss Willa she receives a surprise she never imagined coming.

THE WOEBEGONE
Lex and her boyfriend Ray are struggling financially, even waiting at a beach to meet a stranger to sell camera lenses for money just to survive.