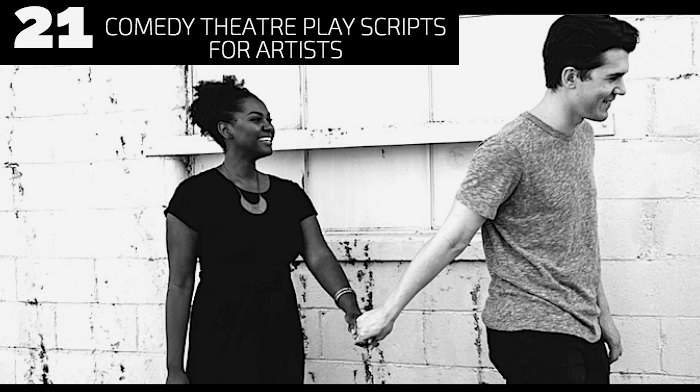 21 Comedy Theatre Play Scripts for Artists offers one-acts that range between 5-10 minutes long and are also good for videos/class/reel.

DOG ANXIETY
Zara did her good deed by saying yes to babysitting her friend’s puppy Oscar, only to find out that the little doggy is a demon.

DARLING FACE
Beverly imagined a fantastic life filled with bliss until she got married and moved into the middle of nowhere.

PHONE CALLS
Meagan is fed up with the games men play when they show interest and never seem to call right away.

UNDERWHELM
Wilma is absent from life even though her eyes are wide open.  All she needs is something to wake her up.

HULLABALOO
Maggie talks to her neighbor Dun about the possibility of sending her son to an academy to straighten him out for good.

RATHER BE A MAN
Two young women talk at a cafe about how men always seem to bother them.

FUNGUS AMONG US
Alexa has reached her limit of no return after her filthy roommate leaves a mess throughout the apartment.

READY, AIM, AIM
Rose goes on a tantrum over the fact that her boyfriend doesn’t seem capable of ever peeing in the toilet without spillage.

FOOD FOR THOUGHT
Kelly might be going crazy or she might be correct about her friend stealing her creative ideas.

KICK IN THE PANTS
A waitress plays hard to get in this romantic comedy.

PIZZA FROM CARLOS
Corky shares her troubles with two men she call best friends but in reality they are two perfect strangers.

THERE HE IS
Pete brainstorms with a friend over lunch as to how to get rid of his annoying co-worker.

ACROSS THE FACE
Bobby is a new theatre producing big-shot who wants to call the shots at the director for how to direct the actors in the scene.

MEDIUM
Derek walks around like he’s Goliath, when in reality he’s smaller than David.

GRACE PERIOD
Two guys stuck inside their lousy apartment because of a pandemic.  One of them doesn’t mind at all, while the other is having panic attacks.

LOCAL GUY FROM THE NEIGHBORHOOD
Phil teases his neighbor over being a bad dad but when he gets introduced to his neighbor’s daughter, sparks fly and he changes his tune.

FRONT ROW SEATS
Joe is sitting front row with his girlfriend about to watch a play but he suffers inside with a deep desire to race to the bathroom seconds before the play begins.

THE LAST M&M SAMURAI
Dan has a special theory as to why he never eats the last peanut in his m&m bag.

LANDED ON YOUR DOORSTEP
Mel has it made.  Two years ago he crashed his brother and sister-in-laws house and hasn’t left since his arrival.

UNTIL THE NEXT EVENT
Drex is giving his girlfriend an ear full because her mother ruined his brand new book.

OUTTER REACHES OF SPACE
John has no patience as it is but when he goes shopping with his girlfriend, he nearly has a heart attack.