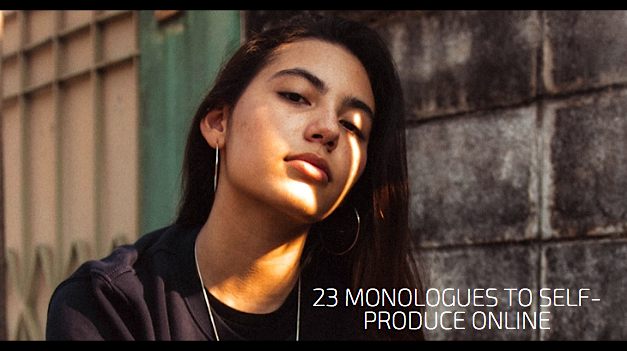 23 Monologues To Self-Produce Online provides 1-2 minute monologues for actors who would like to create videos of themselves performing.

MB maintains thousands of monologues on it’s site and you are welcome to choose any monologue you wish to record yourself and work on your craft.

It’s much easier to set up a camera or use your phone camera with some natural light within a simple framed setting and you are good to go.

THE OUTCOME OF DESIGN
Jeffrey is a highly intelligent young man who contemplates the meaning of life with his best friend Gesebel.

SIREN IN THE NIGHT
Crystal is a homeless teen who has been living in a parking lot.  She gets spotted by her friend’s father who tries to help her situation.

OVER THE MOON
Lucia is on a date with a very intriguing man.  He is intelligent, wealthy, romantic but has to go back to the 17th century.

STARDUST
Doogie has always had a crush on his best friend and during some time hanging out at their local diner he tells her the truth of his feelings unintentionally.

WASTE OF TIME
Byron is a natural born entrepreneur who wants to drop out of school to run his BMX business.

AN ALIEN KEEPS STEALING MY BEER
Noel is caught up in the frustration of having an alien rob the beer he keeps storing in his fridge and so he’s come up with a plan to catch the tiny fella.

SHORT END OF THE STICK
Chazz has been asked to lend his sister some money but because of the rocky relationship he has with her he isn’t to forthcoming about giving her a helping hand.

KILLING YOU
A dark monologue character that has caught their latest victim but things may flip on this serial murderer at last.

MORE WAYS THAN ONE
Porterfield is a student in High School that can’t seem to get his act together and before he gets officially thrown out of school for good, his principal gives him an outlet that could lead him on the right path.

A REASONABLE PLAN
Shabe is caught up in a bad situation.  Some criminals are trying to frame him for a crime that has not happened yet.

SOFT SONG
Tina is a professional musician who is in the middle of recording her latest album.  Her Grandmother is on her death bed and she has a choice to make.

SINCE CHILDHOOD
Zoe has secretly been in love with her best friend for years, but now that he’s getting involved in a relationship, she isn’t sure how to handle being around him.

FOUR SUMMERS AGO
Sister rivalry has gone too far and after years of deliberate hurting peace may finally be embraced.

BURDEN OF BEING TAKEN
Baker is back home after fighting in the war and he tells his parents the painful truth of how he died.

BEAUTIFUL DAY
Linda has always felt ashamed of her looks but on a chance encounter with a stranger, she may see herself differently for the first time.

HEAD IN THE CLOUDS
Drizzle works with the owner’s son and tries to give him some life changing guidance.

COMFORT ZONE
For once Lara would like to see her boyfriend step out from his comfort zone and be more social, even if it’s for one night, for her.

OTHER SIDE OF THE ROAD
While driving over to her grandparents house, Cindy accidentally hit and killed a squirrel.

CHAIN OF HEREDITY
Gregory’s ex-wife comes over to visit him for his birthday and he reveals his guilt for not treating their daughter with the love she deserves.

PAY ATTENTION
Linda wishes she didn’t just discover the fact that her man is cheating on her with her best friend.

PLAYING HOUSE
After years of mental and emotional abuse Annie has decided to take a stand against her family and leave.

A SHADE OR TWO DARKER
Lion faces off with his father about his personal truth and the truth of their family.

QUALIFIED FOR THE JOB
Jack sticks up for the only person who has ever truly believed in him, his boss.