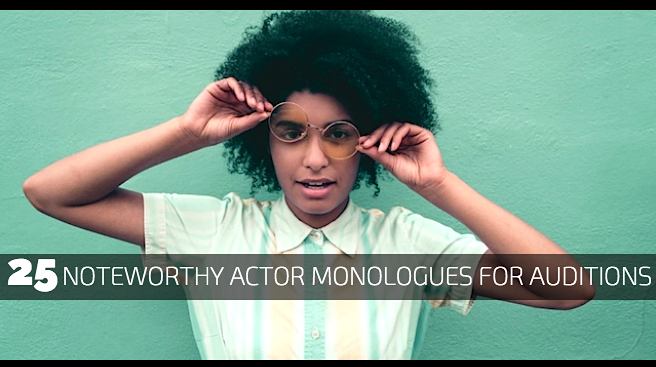 Here’s 25 Noteworthy Actor Monologues for Auditions (comedy/drama) a divided selection of monologue content for both women and men.

VOICES IN THE TREES
Marina undergoes frequent visits to her doctor because of her problems but her brother is always teasing her.

ATTENTION
Michelle wishes she and her sister got along but they never seem to get it right.

MIND TRICK
M/F wants to be accepted and have friends but questions normality.

ONE-WAY CONVERSATION
Bella has been keeping her emotions locked up for far too long with regards to her mother.

PROTECTIVE SHIELD
Rita opens up to her friend about how difficult it is for her to be at peace when talking with someone.

MORE WAYS THAN ONE
Porterfield is given an option from his principal to either get expelled or try a new program.

SHRINKING VIOLET
Dabney and wife Harlotte go head to head over the rights of their son.

ONE-WAY CONVERSATION
Bella has been neglected in her upbringing and tries to figure out why by questioning her mother.

DISTANT MEMORY
Jessica and Brian are caught in an apocalyptic circumstance and must figure a way out to survive.

LOCAL GUY FROM THE NEIGHBORHOOD
Jack and Phil have been neighbors for years and when Jack meets Phil’s daughter for the first time his heart skips a beat.

WHATEVER HAPPENED TO LUELLA BEANS?
Rebecca and her daughter have a discussion about money, crime and that she’s not her actual mother.

EVEN THE COLOR BLUE
Johan wants to come out to his family but due to an apparent illness his father has he may not get his chance.

COME WITH ME, BACK HOME
Daz goes along with his weekend routine, picking up his drunk mother at their local bar.

ROGER USED TO BE WILLY
Rosanna’s father is too much to handle and so this teen leaves home to start a new life for herself across country, but when a bounty hunter finds her to bring her back home, a new chapter arises.

SHADOWS OF MY MIND
Naomi turns to her Aunt for advice because she’s emotionally distraught and unhappy.

THOSE DAYS ARE OVER
Marsha defends herself against the nasty ways her sister always tries to hurt her.

SOMETHING ELSE TAKES OVER
Taliya suffers from a bad temper and wants tp change but she doesn’t know how to do so.

AFTER-SCHOOL ACTIVITIES
LaQuisha doesn’t really want her mother to be her trainer for track & field.

THE BEAR
Putting yourself first is not always as simple as it sounds.

TWO SHADES AWAY
Melanie feels that in her past she did something that altered her current state of happiness.

TYPICAL TEEN
Shadira is a talented figure skater and straight A student but her family doesn’t see her potential.

FIRST MOVE
Susan likes a guy and doesn’t want to wait to be asked out.

WASTED TALENT
Donnie’s friend killed himself and this short play explores the damage it caused.

MIDSUMMER NIGHT
Chanade’s friend meets her at a cliff in order to prevent her from being suicidal.