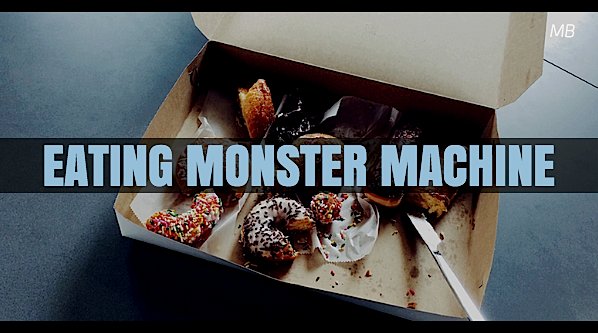 In this short comic scene, BILL complains to his friend JOEL about his slob like eating habits.  The two embark on a bet to see if Joel can eat quietly.

Bill: Don’t you know how to eat a donut without being such an animal?

Bill: You nauseate me.  This is why we don’t go out to eat too often because you’re such a slob.

Bill: Just eat the donut, you don’t need to suck every finger on your hand. Do that in the privacy of your own home.

Bill: Licking your fingers?  You call that licking?

Joel: How do you lick?

Joel: Don’t say that too loud.

Bill: Never in my life.

Joel: Take it easy, I was enjoying my donut.  I got into it.

Bill: Yeah?  You got into it?  Do you have to moan and make slurpy sounds too?

Bill: Yes you did.  (imitates him)  Hmmm, arrrmmmnn, mmmmmm.  Like you’ve never eaten food before.

Bill: Is your whole family like that though?  Do you all eat like that? Seriously, I want to know.

Joel: You’ve been to my house, you tell me.

Joel: So what?  This is how I like to eat my food.  The way I eat is what makes it so enjoyable.  It’s my own way.

Bill: So, you’re telling me that you can’t eat a single meal without making noises, slurping and licking your fingers?

Joel: I don’t know.  I wasn’t even aware of it until now.

Bill: Hold on…here…eat my donut.  I didn’t touch it yet. And I challenge you to eat it without making a noise and no finger licking aloud.  Do you think you can do that?

Joel: Well I’m gonna make a noise when I chew.

Bill: No noise.  Like normal people.  With your mouth closed. I want you to eat that donut completely silent and I want to see.

Bill: Call it a science experiment.  I want to see something.

Joel: You’re not going to tell me what it is you’re seeing?

Bill: Will you eat the donut?

Joel:  …It’s uncomfortable with you staring at me like that.  You don’t have to be so serious, it’s a freaking donut.

Joel: The way you’re looking at me.  It’s making me self-conscious.

Bill: Are you serious?

Joel: Yeah.  Look the other way or else I can’t do it.

Bill: Can’t do what, make noises?

Bill: Pain in the ass you are….here, that better?!

Joel: Just stay like that now and I think I can do it.

Bill: Fat bastard you are, hurry up.

Joel: Stop talking and I’ll do it.  Keep breaking my concentration.

Bill: I’m gonna get a stiff neck by the time you do it.

Bill: No, you didn’t.  Liar!  You made that sound you always make.  I heard it loud and clear.

Joel: Alright, FINE, so what?!  Can’t a man enjoy eating his food the way he wishes to eat it?

Joel: So why’d you put me through all of this?

Bill: I wanted to break your balls.  It’s what I do.

Joel: All for nothing?

Bill: Yeah, I don’t care.  I’m actually used to it.  I expect you to eat like a billygoat.  In fact, if you actually ate quietly, I’d think there was something wrong with you.

Joel: Thanks.  Now I want to eat quietly just to piss you off.

Joel: Fifty bucks says I can do it.

Bill: You couldn’t do it for a hundred you fat slob.

Joel: No really.  I’ll prove to you I can eat like a real gentleman.

Bill: It’s too late.  It’s who you are.  You can’t control it.  You can’t stop it.  You’ve trained yourself to be this eating monster machine.

Joel: I can control it, I swear.

Bill: I’ll make a bet with you but it can’t be over a donut.

Joel: Soup?  Where we gonna get soup?

Bill: We’ll take a ride to the diner.  We’ll pick up some soup.  If you slurp one single time, that’s it, you lost a hundred bucks.  Deal?

Joel: Everybody slurps their soup though.

Bill: That’s the challenge.  You either accept it or pass.

Bill: You got that hundred ready for me?  You might as well give it to me now because there’s no way you won’t slurp your soup.  No way!  Last chance.  I’ll give you one last chance, you sure you want to take the bet, cause you don’t have to?