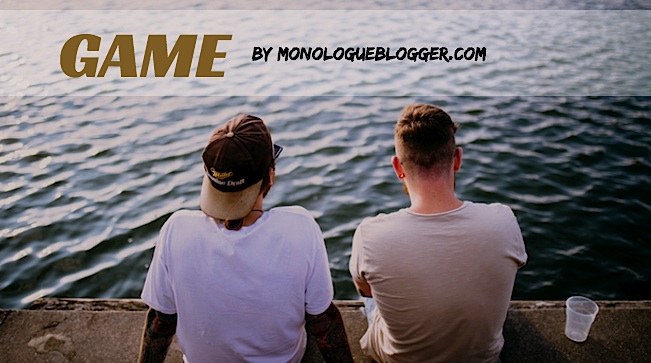 This is a scene that takes place between two friends.  PAUL has been giving shade to SAM, who reacts to it by confronting Paul.

S: Is that your game, to make me feel bad?

P: What do you mean?

S: You know what I’m talking about…what’s your deal?

P:  What are you talking about, dude?

S: The way you needle me.

S: Yeah, needle me.  Like you enjoy jabbing me.

P: Sammy, I really have no idea what you’re talking about.

S: Don’t play dumb.  At least have some integrity.  If I lose my temper it’s game over, you win.  And I’m not going to lose my temper.  I’m not going to have you win.  I just want to inform you that I see right through your game, I see right through how you really feel about me. All this time I thought you were my friend and all the while it’s just keeping an eye on me for your own benefit. Just cause your name is on the line.

P: Well, I’m certainly not going to just expect the work we do to be crap.

P: Sam, you’ve been known to get lazy from time to time.

S: Lazy my ass!  I put my heart and soul into the work we do.  I never sit around all day the way you do.  You’re the one that’s lazy and gets nothing done with your life.  I do all the work, you just ride my wave.

P: Maybe you should just leave. This is going in a bad direction.

S: Be honest with me.  Stop talking behind my back, like I don’t know.  I can only imagine the sh’t you say about me.  All I’ve ever been to you is a good friend.  You’re a poser.

P: Sammy, listen, I’ve had a really long day, I’m tired and disgusted with what your accusing me of and not quite sure I fully understand it either. It’s best you leave. Please. Get out, now.

S: I won’t leave until you own up to your bullsh’t like a man.

P: Then I’m calling the police.

S: Call them and then watch what I do.

P: What are you gonna do Sammy, gonna start breaking up my things.  Go ahead and I’ll take you to court.

S: You have no idea what I’ll do to you.

P: So now you’re threatening me?  Is that it?  Woah, this has really gone too far man.

S: Own up to it!  Last chance!  Tell me what you have against me or we are no longer friends.

P: At this point that’s best.  Who wants to be friends with a raving lunatic.

S: That’s how you want to play it?  You may not want to admit it, but we both know the truth.

S: You’re not man enough to admit it.  That’s fine.  Obviously, if you cared enough, you would have come clean and made things right between us.  I don’t know what you have against me but it’s clear you don’t give a damn.  This whole getting in your face thing, it was my attempt at getting at the truth with you cause I know your a silly punk and won’t ever man up on your own accord.

S: You won’t hear from me again.  If you ever have the heart to communicate the truth, I’ll gladly listen but until then, this isn’t a friendship I need.  Later, Paul.