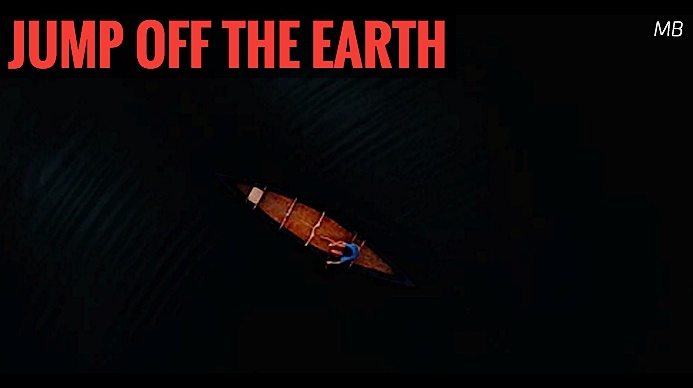 BEVERLY flips through her beauty magazine from the couch. JUDD enters the living room with his beer.

Jump off the Earth

Beverly: That’s all you gonna do your whole life, right?

Judd: F’ck you talkin’ about?

Beverly shakes her head and closes her eyes.

You got something’ you tryin’ to say to me or we playin’ mind reader again today?

Beverly: Look at yourself.

Judd moseys across the room to a full length mirror. He sets down his beer. He lifts up his t-shirt and sticks out his gut, rubs his stomach and begins to play a drum beat all the while walking back to Beverly. He stands right before her.

Beverly: Come on. Stop it! Will you stop it? Get out of the way!

Beverly: Whyn’t ya go on a diet or something? You smell, too.

Beverly: You smell like a foot been trapped in an arm pit for a week straight.

Judd: That all you got? Not so bad.

Beverly: You smell like a fish after banging an Indian curry.

Judd: Oh, come on. That don’t even make no sense.

Beverly: You smell like a corpse that’s been lying dead in a bucket of cigarette ash and beer.

Judd: That’s about right. (beat) Whatch you doin’ with yourself?

Beverly: Ain’t doing nothing but watchin’ time go by in this boring ass life we be living in.

Judd: What’s boring about it? We in the country. We got fresh air, countryside views, home cooked meals and a ton of other shit I can’t seem to remember.

Beverly: Exactly. We are one great giant dump.

Beverly: A dump. We a dump. We the excrement that’s been pooped out from some giant creature none of us will ever be able to see.

Judd: What the hell are you watching online lately? It’s warping your brain girl.

Beverly: It’s true. Ain’t nothing warping my brain. I’m gettin’ smart. It’s time we all start waking up and looking around and seeing that this ain’t it.

Judd: What ain’t what?

Beverly: This! This whole damn painting we all find ourselves stuck in. I mean, really, don’t this all seem strange to you?

Judd: This is just how things is, is all.

Beverly: Does it ever cross your mind—I mean, do you ever ponder the what’s and why’s of existence?

Judd: Oh Bev, I ain’t about to get into science talk…I ain’t your guy for that. I can give a shit less. I wake up, I eat, I work, I sleep…I f’ck. Don’t need to know anything more than that.

Judd makes his way to the kitchen fridge.

Judd: I’m actually a happy man. Life is easy peasy pie darling. The less I know the happier I’ll be. Just let it all unfold. Fine with me.

Beverly: I want to jump off the Earth.

Judd: How you gonna go and do that pumpkin pie, your ass is too big? Ha ha.

Beverly: I want to jump off the Earth into the ocean of space and swim wherever I wish to swim. I wanna go as far out as my legs and arms will take me until I drown.

Beverly: That’s what I want.

Beverly: Can’t you take me seriously? Ever??

Beverly: Who cares what you want, Judd? What you want this minute is only gonna be the same as the next. I’m talkin’ about big ideas! I don’t want to settle for this life…I want more, I want more from this life.

Judd: What more you want girl? You got everything you need right here, don’t ya?

Judd: Well, I guess, shit, I guess we can take a ride in my pick up and go somewhere’s.

Beverly: That’s not it.

Judd: You ain’t happy. I got that much.

Beverly: I want to be able to do what I imagine, without restriction.

Judd: Hell, I’ll give you my keys, go wherever you want—

Beverly: No you stupid man! God, you are just a bundle of dumb. I ain’t never met a man as dumb as you. How many brain cells you have? Five? One for the f’ckin you mentioned, one for the labor, one to eat…drink and God knows what the hell else…

Judd: I forgive ya.

Judd takes off one of his boots and sticks it in his mouth. He bites down like a dog and then suddenly winces in pain.

Judd: Ow! Owhh! My toofff, daing it! (Beverly walks to Judd to inspect)
I cracked my stupid tooth.

Beverly: What are you doin’ you damned fool?

Judd: I was eating my shoe but I, look, (shows his teeth) chipped my tooth?

Beverly picks piece of the tooth up from the floor.

Judd: Daing gone daing it, gone dain. It’s what I get for listening to you.

Beverly: You be fine. Aint the first chipped tooth you got, won’t be the last.

Beverly goes back to sitting down. She thumbs through her magazine and then throws it across the room.

Judd: What the hell is wrong with you?

Judd slowly approaches her gently. He sits beside her on the couch.

I know I’m a simple man, darling. I know it. I do have some charm on a good day but mostly I’m a rugged son of a bitch who kind of follows the—

Beverly puts her arms around Judd. She cries and holds him tightly.

Once they release one another…

Judd: You coming on your period?

Judd: Ummm, I’m a man. That’s like asking a fish if it can swim.

Beverly: Watch you want then?

Judd: Damned if I know. I go with the program, you know that.

Beverly gets up from couch.

Beverly: Let me see what we have. I’ll whip something up for us.

Judd: Beverly…I know something just happened here, something beyond what I can give, I think…if you, if you just take your time with me, really explain it to me, I may come up with something to say that will make you feel better.

Beverly nods. Walks into the kitchen.