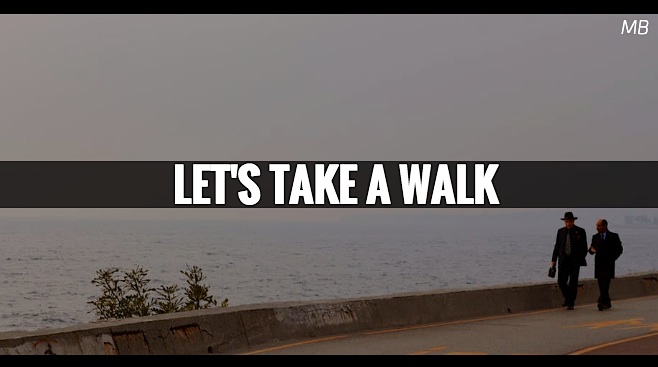 In Let’s Take A Walk, Mario has a meeting with Vito about a situation that recently unfolded at a club with a few members of the crew.  2 Men.  Crime Drama.

Vito: I want you to tell me everything that Lonnie said and did that night.

Mario: Jesus Vito, you’re gonna put me right in the middle of this thing.

Vito: You tell me the truth you’ll have nothing to worry about. Just tell me what happened. Exactly.

Mario: He was taking things too far. But I mean, like, really too far. He was insulting everybody. He was on a tear but when he got to Rick, it went real bad, real fast. Rick, he wasn’t having it that night from Lonnie and one word led to another and the next thing I know they were pulling out knives and guns and it all happened so—

Vito: Slow down. Let’s start again. What was the first thing that Lonnie said to Rick?

Mario: He called him a fat bastard.

Mario: Well, then he got into talking about Ricky’s kids and his wife being a slut and so Rick hit him with a shot and that’s when everything went crazy.

Vito: So, after Lonnie insulted Rick’s wife and kids, Rick punched him?

Vito: What did you do?

Mario: I tried to break it up. Me and the other—

Vito: Little Mario was there?

Vito: I was told he wasn’t there.

Mario: …he was there, Vito.

Vito: He was there?

Mario: He was there.

Vito: Did that little bastard start this whole thing?

Mario: No, it was Lonnie digging in on Rick. Little Mario just happened to be there. He was actually trying to help the situation.

Vito: He was trying to help the situation?

Mario: Vito, I swear to God.

Vito: You swear to God?

Mario: I would never lie to you.

Vito: Tell little Mario I want to see him now.

Vito: He’s got one hour to be here or I’m coming for him and that’s the last thing you want to happen.