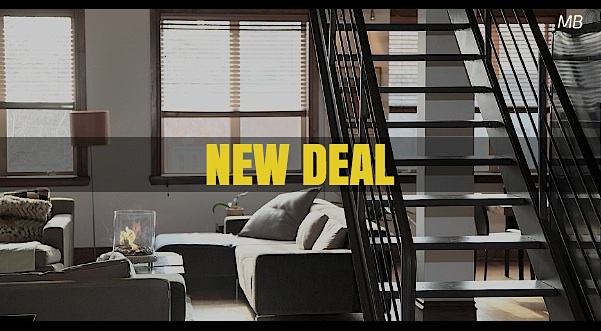 New Deal is a dramatic scene for 1 woman, 1 man.  Carol is a high powered woman having an affair with up and comer Winston.  Drama.

Winston: Sometimes I don’t know what to do first.  I get so overwhelmed.

Carol: Once this deal goes through you can relax.

Winston: And then there will be some other deal and a deal after that and so on.

(gesturing to his drink)

Go on while I make this for you…

Winston: Thanks…eh, there isn’t much to say, I don’t want to always come off sounding like a stress head.

Carol: Haha.  Believe me, you aren’t. My husband, that’s a stress head.

Winston: How is Jack anyway?

Carol: He’s the same.  Still trying to run the world, control everyone in it.

(Carol comes back to the couch with Winston’s drink)

Carol: No.  Don’t try and run from what you were saying.  I want you to take full advantage of your time with me while you’re here.

After you close this deal and you will close it, maybe we should go somewhere together.

Winston: How would that work?

Carol: We can meet at a destination.

Winston: You think you can pull that off?

Carol: If I died and came back, it wouldn’t make a difference to Jack.

Winston: He wouldn’t question you?

Carol: He would but I’ll have that covered.  Let me worry about the details, you worry about picking the spot.

Carol: Of course.  Don’t you worry your pretty blue eyes.

Carol: Answer it while I change into something more comfy.

Winston: Frank? What’s up?  (beat) Okay, calm down and breathe, I can’t hear you clearly.  Hel–Hello?  Fra–yeah, hello, Frank, I can hear you now.  What’s going on, you sound intense?  (beat)  Killed himself?  When, tonight?  (beat) Jes’.  Who’s taking the slot?  Oh man, that a-hole?  We’re never going to get this deal, not with him onboard.  The guy hates my guts.  Does he know I’m on? That’s true, my name is, shit, right, right.  (sighs) What are we gonna do man?  I mean, I don’t have to go to the in person, maybe he won’t be such a prick but, the guy…this is such terrible news,  Why’d the guy kill himself?  That’s…I mean, what the hell is that…the window?  On a cab?  No kidding.

(Carol comes back in lingerie and a tray with coke on it.  Winston does a bump and gestures to Carol that the call is bad news by a thumbs down gesture and shaking his head no.)

Is it me or did the guy look like a bird?  Didn’t he look like a bird?  Hahaha. One would imagine he could fly with the beak he had, right?  Wow.  But seriously, we shouldn’t even be joking right now, Marv is gonna kill us if we lose this deal.

Let me…(sighs)…let me call you first thing in the morning.  I’ll brainstorm tonight, see what I come up with.

(Winston hangs up his phone)

Carol: Did you go bust?

Winston: I’m no good for you tonight.  I–my mind is whistling and I’m not going to be able to do anything but think about how the hell I’m going to win this account.  We had a guy on the inside who, you’re not going to believe this…killed himself by throwing himself out of a thirty story foot window, landing on top of a yellow taxi.

Winston: Well, yeah.  We just don’t know why or what or anything and it’s cruel but this guy that killed himself was our chance at…(sighs)  The truth is I’m going to lose my job…if I don’t get this…Marv, my boss, he told me yesterday…he outright said that if I don’t secure this account, I’m out.

Carol: Who is this Marv?

Winston: You know him. Marvin Mandell.

Carol: Oh, God, I cant stand that swine.  He is such a disgusting slob.  Why would he want to fire you out of all people?

Winston: Cause I blew a deal last month and six months prior to that I haven’t landed anything significant for him to be excited about.

Carol: I’ll call up a few friends and you will be sorted out.

Carol: Are you forgetting who I am?

Winston: Not at all.

Carol: Call this Marv up on the phone for me.

Carol: Winston, don’t make me ask you twice.  Just dial his number and hand me the phone.

(Winston not sure if he should do this)

Before I change my mind.

Carol: Excuse me, is that how you say hello?  (beat) Sorry, you should be sorry Mr. Mandell, this is Susan Liptke.  I am a friend of Winstons.  I’m going to offer you three major accounts for your firm beginning tomorrow but here’s the catch, you can’t fire Winston for the next five years.  I want it in a contract and then I will give you the gold.  You’ve heard of Bergdorf Gooodman haven’t you?  Yes.  Times that by two other surprises and one more thing…this deal with

Carol: The Cedars?  Yes.  It’s closed.  It’s not going to go anywhere so before you get yourself in a rude rut, remember I’m giving you three major accounts on a silver platter…and one more thing…you need to make Winston a partner in your firm.  That’s correct.  Oh and Mr. Mandell…Winston quits.  He’s starting his own agency.  Goodnight!

Winston:  What the, what was that, what are you doing to me?  I’m ruined!

Carol: Now, now bravery.  God didn’t that feel good to give it to old Mandell?

Carol: You are born.  I’ll make a few calls in the morning and it’s time you go into business for yourself.  You’ve been slaving over this Marv guy for quite some time.

Winston: I don’t know what to say.  You will help me like this?