Sharing additional analysis into our new plays is another layer of information for performers who wish to put on a staged production, acting students and teachers who wish to perform our theatre scripts and/or study them in drama class, and theatre producers seeking new play material for professional licensing.

Let’s take a dive into the new play, Roger Used To Be Willy.  This is a one-act play with a running time of about ten minutes.  The action takes place between two characters, Rosanna (14) and Buck (50’s).

This play examines the power of friendship and it’s significance between two very unlikely human beings.  Despite all personal differences, we see how two strangers can actually connect and influence one another in a positive way.

Buck Winston is asked to find and return his closest friend Roger’s daughter Rosanna.  The action of the play takes place in the aftermath of having found Rosanna and bringing her back home safely.

Rosanna:  Rosanna is a young woman who is in need of wishing to get out of the entrapment she feels her father bestows upon her.

Buck: A die hard loyal friend who will go to the ends of the Earth for Roger, even if it means his own death in the process.

Buck Winston is an old friend of Willy (Roger).  They grew up together, both coming from a rough family background and tough neighborhood.  Due to the nature of their environment, both men formed a bond in friendship that has lasted forty-years.

The pattern of their upbringing led both men into the life of crime.  Robbing banks, salon brawls and plenty of drinking was all they ever knew, until one day Willy met the woman of his dreams, so much so that he instantly shifted gears and carved out a new life for himself, deciding to live an honest life and never do anything unlawful ever again.

This caused a major departure and split between the two men and their partnership in crime.  Willy went so far as to change is name to Roger, in order to remain hidden from the law and start a family.

Willy and his wife had their first born, named Rosanna but two years later Rosanna’s mother died from tuberculosis.  Roger had no choice but to raise his daughter on his own and although he loves his daughter more than anything else in the world, he comes off as extremely strict, partly because he fears anything bad ever happening to Rosanna and partly because he struggles to show his true compassion and softer side to his daughter.

This conflict between father and daughter escalates to where Rosanna eventually flees home with her friends, setting out on her own path.

Roger fears the worst and gets word out to the one man he can trust, Buck Winston.  Roger assigns Buck the duty of finding his daughter and returning her safely back home to him, a task that Buck agrees to do.

When it comes to the two men, Roger was always the more fierce but because of his oath and promise to his wife, he doesn’t want to seek out his daughter on his own, for fear of breaking his honor and possibly killing people.  Buck is his best chance of ever seeing his daughter alive again.

The story takes place during the 1890’s in Oklahoma in the daytime.

Rosanna loves her father but she is at an age where hate has entered her heart because she feels bottled up inside.  This forces her to break free from her father’s clutches and run wild with her friends, abandoning everything she has ever known.  There also exists a deep seed of resentment towards her mother who died while she was just two years old.  Secretly, Rosanna fears that she will suffer the same fate as her mother and die young, which also serves to motivate her to live life fast.

Buck is a stone cold criminal.  There isn’t anything this man hasn’t done to survive.  He’s a loner and has no relationship with anyone.  The only person he respects and will ever do anything for is Roger.  Buck is a first class drifter.

Rosanna and Buck meet for the very first time and their encounter was met through violence.  Rosanna didn’t want to part ways with her friends and Buck had no choice but to ‘take her’ with him and show force to her friends by blowing out their knee caps with his pistol.

As you may imagine, this causes a major rift in their ‘getting to know you’ phase.  But although Buck is a bad ass and Rosanna can’t stand him at this point in time, they both have a chemistry and a liking for one another, which stems from Buck seeing Rosanna as his daughter and Rosanna responding to Buck as a potential adult ally against her father but more importantly as an adult who she may be able to see eye to eye with.

Buck just might help shed some light on Rosanna’s troubles.

The following dialogue is an exchange between Rosanna and Buck Winston, while riding back in horse and carriage across Oklahoma.

ROSANNA: My Daddy don’t love me or else he’d a come for me himself.

BUCK: Oh, no, you got that story all wrong. You’re Daddy loves you more than you think, cause he called me.

ROSANNA: But you ain’t nobody. I don’t know you. I don’t care about you.

ROSANNA: I hate you!

ROSANNA: Why’d you shoot them boys in the knees? They’re friends of mine.

ROSANNA: But they are friends of mine!

BUCK: Listen, darling, you need to quit your shouting before I knock your ass out cold for the remainder of this here trip.

ROSANNA: None of my Daddy’s friends ever talked that way to me before.

BUCK: That’s cause they know better.

BUCK: Better not to talk that way cause your Daddy wouldn’t like it.

ROSANNA: Well, I’m a tell my Daddy when I see him, what you said to me. 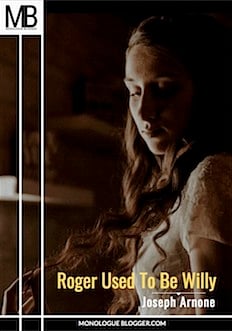 In this one-act play, BUCK is assigned the duty of finding ROSANNA and getting her back home safely to her father.  Along their journey back, Rosanna discovers things about her father and herself.  The time is during the 1890’s and the place is Oklahoma.