Let’s have a look at the two person play, JEF.

JEF is a science fiction one-act play that deals with love and loss.  Landia’s boyfriend was accidentally killed and to cope with her loss and start anew, she contracted a new replica technology for a humanoid robot.

The humanoid is JEF, who is an exact replica of her deceased boyfriend of the same name.  It’s been about six months since robot JEF and Landia have been living together and Landia isn’t so sure that she can continue the relationship.

LANDIA:  Landia suffers from a major loss, losing the only man she has ever loved to a freak accident.  In order to cope with her emotions and recover from the pain of Jef’s loss, she contracted JEF.

JEF:  Jef is a humanoid robot designed to be an identical being of human Jef for Landia.  The question arises as to whether Jef has his own identity or if he should remain loyal to the program he was designated to be.

Landia was madly in love with her boyfriend Jef.  They were set to get married and start a family when tragedy struck.  Jef was killed in a motorbike accident.  The loss was too much for Landia to handle and she contemplated taking her own life.

An advertisement was seen for the most advanced robot program to ever exist.  A company that specializes in artificial intelligence and biology recreation offers people suffering with loss an opportunity to have the person they love brought back as a replica in humanoid form.

After much consideration, Landia privately decides to join the program and have humanoid robot Jef live with her for a new relationship.

Everything has been going well but after some time Landia is having issues with the arrangement.  She begins to see robot Jef not so much as human Jef and this disturbs her.  She begins to weigh her own morale and question her own values as a person.

This is a futuristic story that takes place when advancements in technology for artificial intelligence and biology can recreate the likeness of human beings.

At first, Landia is happy to have robot Jef in her life.  her pain begins to ease and good times start to take place again.  Over time, however, Landia begins to question her choices and the feelings she has for robot Jef.  She wonders if she is a traitor to her former lover and to humanity in general.  She is confused by her own conflicted feelings.

Robot Jef, on the other hand, is designed and programmed to satisfy every need for Landia.  Although Jef has been programmed to follow his own ambitions and desires, they come second only to Landia as his main purpose is to make her happy.

Issues come up between the couple as to whether or not their love is real and genuine and if Jef really has the right to live out his own life, despite his program.

JEF: Please, don’t shut me down. We can make this work if you give us more time.

LANDIA: I feel sick inside.

JEF: Give it a night. Sleep on it. You don’t need to make this decision right now.

LANDIA: Jef, this whole thing was a bad idea.

JEF: Landia, I know that if this is what you want, I won’t try to stop you but I have my own feelings and thoughts that make me who I am. I may not be the Jefrey you knew but I am the Jefrey you know now. And yes, there may be a few differences but that’s because I am my own person and if you can accept those few minor differences and find love in them, well, we could make this love of our own work. You don’t need to lose me twice.

LANDIA: I don’t want to lose you but I can’t act like Jef was just some distant memory.

JEF: We can mourn him together. You don’t have to do it alone. Jef would want that, don’t you think?

LANDIA: Jef would want to be alive and in my arms. He had so many aspirations, so many dreams.

JEF: I am pursuing the same dreams.

LANDIA: They are his dreams!! 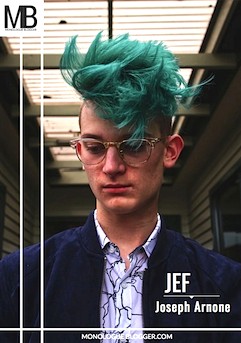 In this one-act ePlay, Landia is at a crossroads as to whether or not she should shut down JEF or continue on with their relationship…