We will investigate the dynamics inside this small private family and the role each one plays against or for the other.

Henry was adopted to a very wealthy family. and this play examines the nature of feeling as though one doesn’t fit in to the environment one has brought into

Once can assume that Henry’s DNA has the feeling of middle class, while his parents maintain the feeling of upper class.  The two different senses of class are in a subconscious battle amongst the mother and Henry.  Henry is more common in his demeanor, while his mother embraces her social status and places demands on Henry to shape up.

The concept of this play revolves around two very opposing perspectives

Henry:  Henry is all too aware that he doesn’t belong to his adopted family, not only by being continually told by his mother but by the living proof he experiences on a day to day basis.  Henry thinks about who his real parents are quite often and even draws imagined comparisons just to pass the time and console himself.

The only person Henry has ever cared for is his grandmother but even that relationship Henry does not feel fulfilled with.  But he will take what he can since he aware of the fact that his mother cannot stomach the sight or sound of him.

He deliberately plays the game of annoying his mother whenever he can…it is all out warfare between them and he has no intention of ever losing the war.

Henry feels he has no concrete connection with his father and in fact despises the man for his weakness.

Mother:  Mother is a woman who enjoys her wealth and the position of her social status.  She would fight to the death if anyone would ever imagine tampering with it.  In comes Henry, her adopted son, who is nothing of the fantasy she wished for in a son and everything she despises.  If she could, she would have Henry removed and replaced but she can’t.  She is stuck with him and he with her.

Henry s the one major threat to mothers grandiose life.  His sheer presence and behavior in social circles stiffens her up and drives her halfway around the twist.  Henry is the only person in her life that she fears and has ever feared.

Father:  Father is such a dull and matter of fact man.  His jokes are sparse and when a joke is shared it is done so in a dry, boring manner…as if you are expected to laugh out-loud in hysterics over such mundane delivery.

Father is obedient to his wife simply out of fear of her irrational and violent outbursts that only he has the secret viewfinder to.   Mother also seems to have something over on father that only the two of them know.  It’s an unspoken power mother has over father.

Grandmother:  Grandmother is the only one in Henry’s corner who is willing enough to put up a fight for his integrity.  Grandmother and mother never got along, however much of what mother is as a person, in terms of etiquette and principle, was given to her by grandmother.  The two women are so similar that perhaps that is why they don’t truly care for one another.

Grandmother’s only ally in the household is her grandson, Henry.  The two get along just perfectly.  In fact, the only affection Henry has ever come to know has come from his grandmother but when one says affection, it is the sort of affection expressed in the most basic way, just enough to know it’s there but never enough to absorb emotionally.

Henry gives grandmother a former sense of her rebellious side and this entertains her greatly, especially in spite of mother.  In a way, Henry is grandmother’s last hurrah.

Once can assume that Henry’s DNA has the feeling of middle class, while his parents maintain the feeling of upper class.  The two different senses of class are in a subconscious battle amongst the mother and Henry specifically.  Henry is more common in his demeanor, while his mother embraces her social status and places demands on Henry to shape up and be more like her.

Henry doesn’t like feeling like he was purchased and must perform as told.  This is the biggest element of conflict inside of him because it degrades all sense of his own humanity and personality.  Therefore, he is in utter defiance to all things authority and to all things that threaten his own sensibility, which is the only thing he truly trusts.

These feelings exist because of his upbringing.  Constantly being shaped and designed to be “one of them” and behave “as they do”.  Where there is no room for individuality, Henry has removed himself from feeling.

He is now a young teenager who is more mentally independent than his contemporaries because he fights for his being.

After years of this ongoing battle, you have a piece of time captured in this play as to how things developed into their present state and one can ponder further as to where Henry will be from the current play’s circumstances.

Mother has only become more bitter at Henry and father for that matter, since father was the one who made the final decision on which child to choose at the orphanage.  Needless to say, she regrets their final choice.  What was once a happy and hopeful affair has slowly turned over the years into a disappointing and almost emotionally crippling existence but it’s the pride, the pride of the mother that won’t let her darkness get the best of her and so she fights to the bitter end, not allowing to be conquered by Henry.  If she loses to him, she loses her entire existence.

Father goes with the flow but sides with mother through thick and thin.  This comes from years of verbal abuse that he just can’t manage anymore.  His nerves are destroyed and so he puts on a brave face and easygoing manner in order to make things pass as simply as possible at home.  He doesn’t want to rock the boat because he doesn’t have the strength and in fact, never really did.

Grandmother lives at the home because she doesn’t want to be alone but also as a way to cause drama.  She loves a good fight and gets excited whenever she in one or observes one.  It’s the only way for her to keep going.  She was never fond of father but tolerates him because he is harmless and mild.

The motion of the play takes place inside a large and upscale dining room.

HENRY: Oh, it’s very touching. There’s a man, a cab driver, who has just lost his beloved son; he’s dead and all he wishes to do is talk to someone about it; to share his grief, but all he receives are rude customers who never care enough to hear his words. At the end of the story he is left talking to his horse, the only friend he seems to have left.

MOTHER: Are you trying to be clever?

HENRY: I’m only relating the contents of the story to all of you for conversation. It was very moving to me.

MOTHER: Why was that story, out of all of the short stories that Chekhov has written, why is it THAT ONE, the one that moves you so?

HENRY: Because I felt bad for the man in the story and…that’s why.

GRANDMOTHER: I think it’s wonderful that you find yourself inside the world of such characters. That’s the stuff of life, isn’t it, Henry?

GRANDMOTHER: Good for you. Not many young men your age have such a keen interest in reading and even those that do sometimes fall short on emotional connection. 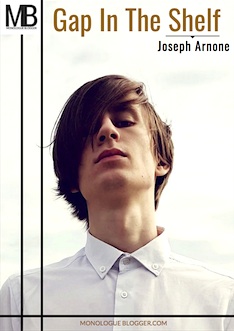 In this one-act ePlay, Henry faces off with his Mother during dinner, over a Chekhov short story collection that he removed from the family reading room.