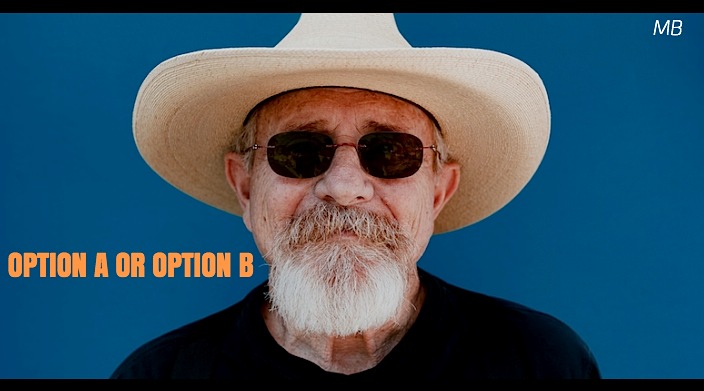 In short script Option A or Option B is a crime drama that takes place out in the desert between two men and one woman.

Option A or Option B

That saves us a load of time. Where’s Billy?

Ted: Where’s he gone to?

Sheila: He took off early this morning. Didn’t leave word.

Ted: I can do anything I want with you right now.

Sheila: What makes you think I’ll allow it?

Ted: (chuckles) That’s good. Billy, he won’t be back for you and he won’t be meeting you at any pre-ordained destination that you both may have agreed upon, prior to my arrival. My advice to you is to go away, start a new life, forget Billy boy.

Sheila: I’m done with him anyhow. It’s been brewing.

Sheila: But that’s all the business you’re gonna know about.

Ted: That’s fair. I don’t mind none. (beat) What do you think I should do?

Ted: There’s really only two options. I can A, wait here until Billy shows up or B, track Billy down until I find him.

Sheila: Or C, leave the whole damn thing behind.

Ted: (chuckles) I like you. I can see why Billy took to ya.

Ted: You didn’t answer my question. Should I take option A or option B?

Billy comes out of the trailer.

Billy throws a black duffle bag down to the ground before Ted.

You can leave us alone now, Ted.

Ted: I could but what about all the trouble you caused?

Billy: Giving this back to you…don’t this make it right between us?

Ted: You waited till the very last second, didn’t you?

Billy: Yeah, I had a better conscious.

Ted: I bet you did. Putting your girl up to bat. Man, does she have any real idea what’s going on right now?

Billy nods for Sheila to go inside the trailer.

Ted: Expect me to pick it up, smile and walk on by?

Ted fires a round into Billy’s thigh. Billy drops to the ground.
Sheila comes running to the door and screams.

Billy: (to Sheila) Get your ass back inside girl!

Ted: That’s for taking my money.

Ted shoots Billy in the opposite thigh.

And that’s for trying to get away with my money.

Alright now…I could pump you up with more holes than your body can take. You realize that, don’t ya?

Ted: We’re gonna put an unnatural spin on things. Lately, I’ve had an epiphany of some kind, call it a spiritual awakening of some kind, I don’t know what the hell you call it but something happened to me recently that opened up a world of question. You’re looking at a dying man, Billy. Don’t have more than a few months time and it gives one a time of ultimate reflection. Makes you wonder if you gave enough in your life. Looking back, I don’t think I have…given enough. So, starting today, this very Goddamn day, I’m going to give. That money is being given to you and that hot piece of ass girlfriend of yours. Damn, she’s got beef! (chuckles) What I wouldn’t have done to her yesterday that I have changed today. Ha, Ha. I’m stripping down boy! Giving away everything I own, down to my shorts and then I’m gonna walk out to the center of this here desert and hope the Lord take me. Do you think the Lord will take me? Billy?

Ted walks to his car and drives off.