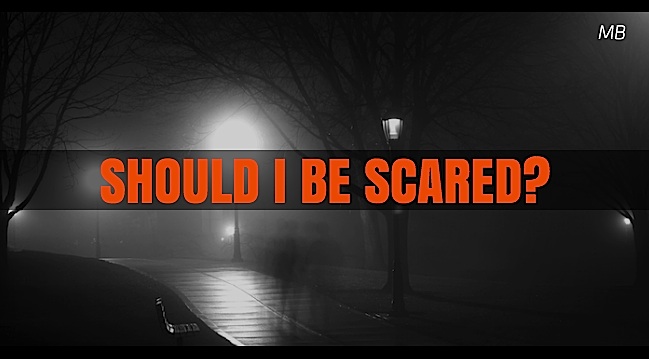 Should I Be Scared?  is a short dramatic script for two actors.  MARLON confesses to his girlfriend HANNAH that he is immortal.   1 woman, 1 man. Drama. Sci-Fi.

Should I Be Scared?

Marlon: There’s something you should know…about me.

Hannah: Okay…should I be scared?

Marlon: It all depends on how you want to view what I’m about to tell you.  You know, there’s a ton of movies and novels…all sorts of stories that exist in this world about monsters, vampires or zombies.

Marlon: Some of those stories are real.  Not the stories that have been told in fiction but the concept, the idea, there is truth to some of these wild tales.

Marlon: I’m sorry.  I don’t mean to make you nervous, sweetheart.  You aren’t in any harm or danger, okay?  (beat)  At first, when I tell you this, you are going to think I’m absolutely crazy, but I’m not and I can prove it to you but before I do I have to let you digest things first.

Hannah:  Just tell me because you’re making me worry.

Marlon: Please, Hannah, I wouldn’t lie to you…you are safe with me.  What I have to tell you is something deeply personal.  Something private and real…I’ve never told anyone this before.  It’s as serious as when you told me what your mother used to do to you growing up as a child.

Marlon: …Yes.  It’s why I don’t age.  I’m…I’m actually about to have my one thousandth birthday, not my twenty-seventh.  I have a book.  A book of photos of me. There used to be paintings of me but they are gone after I took photos of them and I compiled everything, all of my images throughout the centuries.

(Marlon hands her the book – Hannah looks through it)

Marlon: Can I get you something to drink?  Some water?

Hannah: Let me lay down for a second.  I feel light headed.

Marlon: Okay.  You are alright.  Everything is alright.  (beat) Rest your head for a moment.

Hannah: Tell me more…please.  I want to know the story.

Marlon: Hannah, I was given a curse.  My father’s kingdom was being threatened by a King from another land.  Unfortunately, my entire family was murdered and this King overtook my father’s throne.  I was hanged but survived due to a rare physical muscle in my neck which protected me from snapping my neck and suffocating entirely.

My body was dumped in a pile of bodies to be burned but dear friends of mind retrieved me, in order to give me a private and proper burial.

However, a poor woman who practiced witchcraft entered where I was hidden and placed a spell over me, claiming that she was my aunt who was scorned and banned from my family by my father.  She cursed me to live as immortal and never die.  I was in a dream state when she did this to me before she left.

When I awoke, I escaped.  I didn’t want anyone knowing I was still alive.

As time passed I began to remember the poor woman who claimed to be my aunt.  After all the devastation and carnage of my family and misery I felt…I am ashamed to say, I tried to take my own life.  I drowned myself.  Only to wake up again washed up on a shore line.  I can go on with my story…I have tried to kill myself again and again and with each attempt I have returned anew.

Marlon: You aren’t afraid of me?

Marlon: It’s been horrible and beautiful at times…nothing changes whether you live a short life or a long one.  Humanity is humanity and it constantly repeats.  The same scenarios with different human beings.  It’s marvelous.

Hannah: How have you survived all these years?

Marlon: What do you mean, survive?

Hannah: With no family, seeing people you know constantly die, money…all of it.

Marlon: Just imagine the span of one human’s life and then multiply that until you get one thousand years.  Everything moves consistently, gradually just like the ocean’s tide.  The most challenging part is my identity, being able to transition appropriately from one period to another.  I’ve mastered it but it’s not always easy.  It’s easier today more than it ever has been because of technology but I’ve had my challenges.  It also has a flip side to it.

Hannah: What do you mean?

Marlon: Well, I’m becoming known for my internet site.  You know this but it’s reaching a point where I may have to vanish because I’m starting to get recognized and a certain level of attention concerns me a great deal.  I should have never of put myself out there but I had no way of knowing people would be interested in what I was doing and it has been exciting but…

Hannah: Why is that bad, I don’t understand?

Marlon: Well, appearing normal to people is one thing but becoming too well known is another story because I don’t age.  Eventually, people will start asking questions as to why I’m not aging.  Sooner or later this will happen and it’s perhaps wise for me to pull out while I can.  It’s why I keep a low profile.

Hannah: What if you have someone take it over and you direct it from afar?

Marlon: I’m weighing my options.  Maybe shut the whole damn thing down entirely. Cold turkey may be best.  We’ll see.  As I’ve said, I’m good at transitioning but popularity is something different altogether.  The more people that know me, the harder it will be for me.  Time will tell but honestly, it’s the least of my concerns.  My studies in witchcraft, religion and science haven’t given me solutions.  I’m sorry to tell you this but I’m constantly trying to figure out how to end this curse…I don’t want to be around until the end of the Earth.