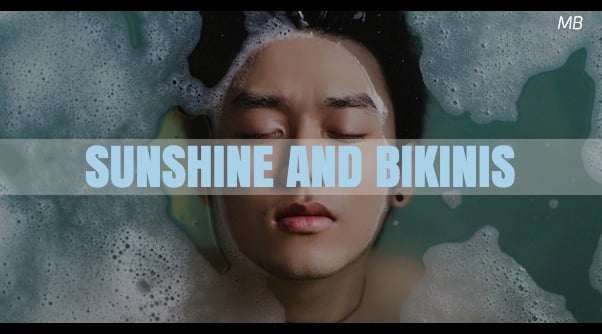 Sunshine and Bikinis is a short dramatic scene, BUSTER visits his friend ALEC who has not emotionally overcome divorcing his wife.

Buster: You sloppy bastard.  Look at yourself.

Buster:  Mustard all over your chin.  Thirty-five years old, going on like you’re some kind of toddler.

Buster: Are you a toddler? Damn.  Your hair all wild and messy, just screaming for a haircut.  Man oh man you are one heartbroken son of a bitch.

Alec: I don’t want to hear it, anymore.  Let me breathe.

Buster: Breathe? Man, that’s all you’ve been doing is breathing.  You sure as hell ain’t living.  Breathing on that smelly ass couch of yours day in and day out.

Alec: Look, I already know what you’re going to say and I can care less.  Just let me live my life in peace or else don’t come and see me.

Buster: When was the last time you’ve gone out?  Not to go to the grocery store or work or see family and friends, but out out.  When did you go out to have some nightlife and fun and meet some women?

Alec: I didn’t go out though…I had a visitor.

Buster: You can live off of one nighters with some random workers.  You can’t build on that.

Alec: I don’t want nothing more.

Buster: You have to start over.

Buster: You can’t be afraid.

Alec: I rather be dead.

Buster: When Carol passed I was dead.  You didn’t know me that far back but when she left me, it was all over for me.  Never thought I’d see the light in anything ever again.  Until one day I was on one of my depression walks at the park.  One of those disgusting self-loathing walks and I decided to get an ice cream from the ice cream truck.  The woman in front of me in the line turns around and smashes her ice cream cone directly into my chest. The ice cream attached itself to my shirt, with the cone sticking straight out and it was the first time I laughed outloud in almost two years.  I ended up buying that woman a brand new ice cream cone and this year we are together fifteen years.

Alec: That’s a nice story but it only makes me want to puke, so thanks.

Buster: What I’m trying to say—

Alec: Buster, I know what you’re saying man, I’m not stupid.  I get it in hear (points finger to his head) but not in hear. (points to his heart)

(Buster pulls out a gun)

Alec: What is that?

Buster: I’m going to come back to see you in twenty-four hours time.  I want you to blow your brains out of your skull.  If you are still in the living, then that should tell you loud and clear you need to start living.

Alec: Are you nuts?

Buster: I’m completely nuts.  You do that for me?

Alec: I’m not going to kill myself.

Buster: Listen, you’re already acting dead.  You have twenty-four hours.  When I come back you will either be dead or alive.  If you are alive, there’s no excuses to start living again.  Face your demons, make your final decision on your path.  (beat) I got nothing else to say to you.

Alec: Are you serious? You’re seriously giving me this gun and leaving.

Buster: Serious as I was when I put that gun to my own head and made my own choice.  Now it’s time you make yours.  That’s it.

Buster: That’s it.  Sunshine and bikinis or wooden coffin.  Your choice.