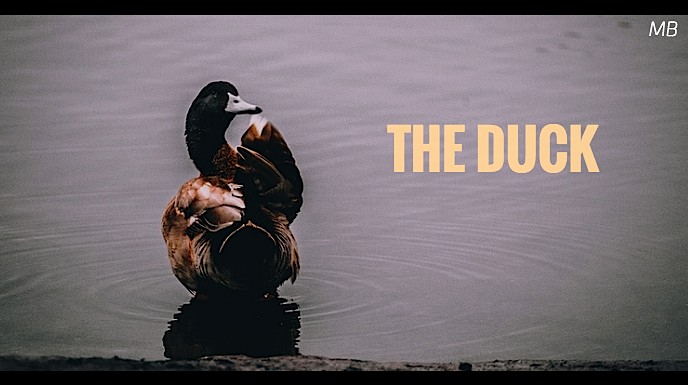 In The Duck, a short comedy scene between a husband and wife who are entertaining a guest in their home who has been coming off a bit whacky.

Meredith: Oh, I believe he went for his mid-day stroll.

Jarold: Did he now?

Meredith: I’m almost certain. (beat) Is something the matter?

Jerald: Not at all, dear. Well, to be perfectly honest, I do believe there appears to be a small question.

Jerald: Well, do you not find Mr. Bernham acting a bit odd?

Meredith: However do you mean?

Meredith: …I don’t believe I’ve noticed anything strange at all.

Jerald: Alright, dear. Perhaps it’s a figment of my imagination but…I happen to be missing a pair of cuff links…the ones given to me on my fiftieth birthday.

Meredith: You must have misplaced them is all.

Jerald: …I caught Mr. Bernham doing a bit of the old snooping around.

Meredith: Did you? When? Where?

Jerald: Well, darling, it happened in the wee hours of yesterday morning. I went to use the toilet when I heard a creak downstairs. I followed suit only to find Mr. Bernham eyeing the Kristofferson painting with a magnifying glass.

Jerald: Correct. Just as I was about to utter a word, Mr. Bernham walked into my study and began gently fumbling through my desk draw.

Jerald: I give you my word.

Jerald: Shh, not too loud, I don’t want him overhearing if he’s returned.

Jerald: I am concerned not only for whatever it is he is up to but also for the man’s health. Have you noticed that he seems to touch things twice?

Jerald: Darling, surely you must have caught wind of what appears to be a nervous tick of some sort. This morning he went to grab the tea pot, first touching it with his left hand as if to take hold of it, only to switch over to his right hand to take hold and touching but then only to switch yet again back to his left hand before gripping the tea pot. I also noticed he’ll be walking along only to suddenly stop, take two steps backward and then walk forward again. Can you make any sense out of such behavior?

Meredith: My dear. I did notice something now that I think on it.

Meredith: For starters, about two days ago, in the evening I could have sworn I heard a bit of giggling.

Jerald: Giggling? Whatever do you mean? Please don’t tell me he was alone.

Meredith: Yes, yes it is. Mr. Bernham was in the kitchen by himself when I entered but just prior to my entrance there was an assortment of giggling going on and please forgive me but I could have heard actual banter.

Jerald: This is quite serious.

Jerald: Do you think he made off with my cuff links?

Meredith: One cannot be sure.

Jerald: Let us study his mechanism and observe his looks; We’ll tent him to the quick. If he but blench, we’ll know our course. We will shake a spear for our dear friend over dinner this evening.

Meredith: There is something else.

Meredith: He was a duck.

Jerald: Darling, please do not tell me that you have gone ill because—

Meredith: No, no. Mr. Bernham was waddling round the courtyard as if he were a duck.

Jerald: And this is the very first time you utter this to me?

Meredith: I was afraid.

Jerald: Afraid of what?

Meredith: That you would think me mad. Who would believe such a thing?

Jerald: But I am your husband.

Meredith: If before this conversation I had told you that I witnessed Mr. Bernham waddling around like a—

Mr. Bernham: Meredith, are you alright? I did not mean to startle you. I thought you mentioned duck. Is that what we will be having for dinner, roasted duck perhaps?

Jerald and Meredith look at one another.

Jerald: We were only discussing the possibility of cooking—

Meredith: Well, I am sure we can arrange it. I will speak with Helena and see if she—

Jerald: Yes! Wonderful! (to Meredith) Darling, I’m going to have a word with Mr. Bernham if you don’t mind. Do let us know if duck—

Meredith: Absolutely. I will find out and—