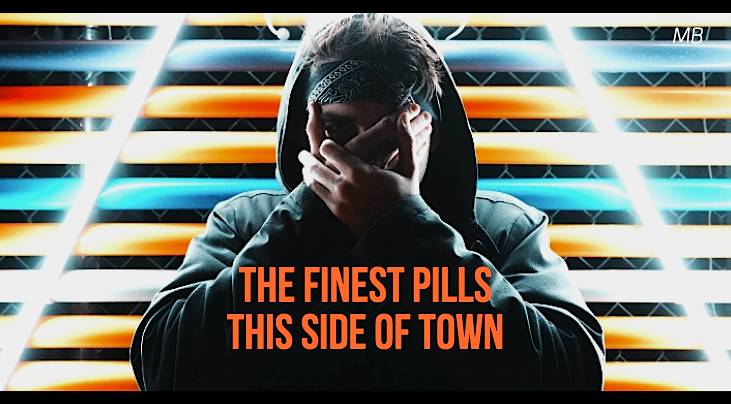 The Finest Pills This Side of Town features a son caught up in a bad way with the wrong people. 1 Woman, 2 Men. Drama. Crime.

The Finest Pills This Side of Town

Laralin: You think you would learn by now to keep those shoes at the front door of this house.

Munster: What difference does it make? Nobody comes over around here anyways.

Laralin: I pay the bills around here, not you. When you—

Munster: Okay, okay! Before you have another one of your fits.

MUNSTER gets up from the couch, grabs his shoes and drops them at the front door.

Laralin: They don’t need to be stinky or old if you worked.

Munster: Listening to you all week is work enough.

Laralin: I am your mother.

MUNSTER crashes back down on the couch nice and sprawled out.

Laralin: I won’t! (beat) There’s two more bags in the trunk, go bring them inside.

Munster: Why didn’t you tell me while I was already at the door?

MUNSTER gets up from couch.

Laralin: You need the exercise!

LARALIN unpacks items out of the grocery bags. She walks to the front door to see what’s taking her son so long. She shrieks.

Laralin: Who the hell happened?

LARALIN looks out her front door and back at MUNSTER.

Laralin: Who busted your nose??

Munster: He’s a guy I know from the park…we had a bet on a basketball game and I lost.

Laralin: You owe that man money?

Munster: I gave him ten so far…I owe him like ninety more.

Why you bettin on—

Munster: Cause it was fun!

Laralin: Owing some extremely large man money is fun to you?

Laralin: Go run outside and get that man. This instant!

Munster: What? No way!

Laralin: So help me God you get your ass out there NOW and get him before he disappears.

LARALIN goes for the front door.  MUNSTER blocks her way.

Laralin: Munster, get out of my way.

Laralin: Why would you get involved with someone like that?

Munster: Mom I’m giving him the rest of his money this week. Tommy is gonna lend it to me.

Munster: What do you mean?

Laralin: You must really take me for a fool, huh?

Laralin: What do you owe this man money for?

Munster: I told you already!

Laralin: Don’t you lie to me!

Rapid knock on the door.

LARALIN finally breaks past her son and opens the front door.  It’s the man she saw with her son. He goes by the name MEL.

Laralin: Can I help you?

Mel: I saw you looking over at me just a minute ago and I decided to come back.

Laralin: What do you want?

Mel: Your fat f’ck of a son owes me five hundred dollars, total.

Munster: That’s a lie! I owe you ninety!

Laralin: (to Munster) Munster…(to Mel) We don’t have that kind of money.

Mel: (as if he didn’t hear her) Five hundred dollars, total.

Mel: For the finest pills this side of town.

MEL eyes MUNSTER.  Puts a stick of gum in his mouth and chews.

If that’s the way you want it.

MEL shrugs his shoulders and walks off.

Laralin: Wait! My son, my son is just a teenager.

Laralin: I’ll give you everything I have in cash and maybe, maybe some jewelry, you take jewelry?

Mel: If there’s some bells and whistles to it.

MEL eyes LARALIN up and down.

Laralin: Let me see what I have in the house.  You wait here?

Mel: (spits his gum out)  I ain’t going nowhere sunshine.

LARALIN shuts front door and locks it. She is oddly calm now.

Laralin: How can you do this to me?

Munster: Mom, I didn’t want you—

Laralin: After everything I do for you. That man out there is sick. Do you know that?

LARALIN rummages through her purse and pulls out some cash. She takes off one of the rings from her hand and catatonically approaches the front door.

Laralin: I have a rose gold ring and fifty-eight dollars in cash. The ring must be worth eight, nine hundred dollars alone.

Mel: I’m not an auction.

Laralin: You said you would take jewelry.

Mel: If it was sparkly. That ain’t sparkly.

Laralin: But it’s worth more than my son owes you!

Laralin: We don’t have nothing else!

Mel: What about that ring on your finger?

Laralin: This is my wedding ring…my husband is no longer with—

MEL grabs for the diamond ring.

Laralin: I’m not giving this to you.

Mel: That look like diamonds. Give me that ring instead and—

Laralin: I can’t give you this ring.

Mel: You running out of time!

MEL’S head gets blown off his shoulders.

Behind MEL stands MUNSTER with a double barreled shotgun.

Munster: We fine now Mama. I already called the cops and reported the incident as a breaking and entering.

Laralin: You’re not my son.

Munster: Go in the house please.