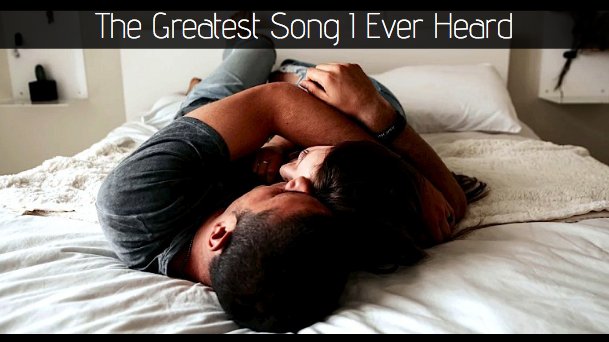 1 Woman 1 Man Drama Scripts 2 Person Scripts 5 Minute Scripts Blog Drama Scripts Scripts
September 11, 2022November 19, 2022 Joseph Arnone Experiencing Love for the First Time, First Time Love Script for 2 People, First Time You Say the I Love You Words, Having The Courage To Admit You Are In Love, KNowing When You Are In Love with Someone, Short On-Act Plays on Love, Short Romantic Scenes for Actors to Play

The Greatest Song I Ever Heard is a short one-act play that captures a special moment between two lovers for the very first time.  1 Woman 1 Man.  Drama.

The Greatest Song I Ever Heard

SCOTCH:  I’m lookin’ at you and I gotta keep thinking I’m outta my mind, right?

MARLA:  And you’re crazy, so there.

SCOTCH: You’re not that bad.  Being nuts doesn’t make you bad.  It makes you eccentric.

MARLA:  That’s just a nice way of calling me weird.

SCOTCH:  Weird, yes but my kind of weird.

SCOTCH:  Who wants to be like everyone else?  How boring is that?  You are your own person and are true to who you are which makes a guy like me, you know, care for you and everything, cause you’re you.  You’re not worried about what most other girls worry about.  Like, you don’t think about marriage or kids, I mean, you think about it but it’s not something you need in your life to feel like you can be accepted by society’s standards.  You don’t give a sh’t and it’s not cause there’s an evil streak in you, it’s cause of your innocence.  You’re not dumb but you are a bit oblivious to what fits into society and that’s why you stand out from a crowd.  (beat)  You know when I first knew I liked you?

SCOTCH:  When I took you to Big Bast’d Burgers, remember?

SCOTCH:  Exactly.  Normally, I take a girl out and she’ll order some dainty sh’t, like a caesar salad, glass of wine or just some ‘gotta watch my figure’ type sh’t.  But you ordered the Big Bast’d Burger and I remember, when you first held up that burger, with your two tiny hands, it was the size of your face this thing and you went all in, without hesitation, when you took your very first bite of your burger, I said to myself, this is my kinda woman.  And you ate the whole freaking thing!  I was amazed cause you didn’t care and that’s what it’s all about, not giving a damn about what others think, just do you, have your own happiness and everything will make sense anyway, right?

SCOTCH:  I wouldn’t change anything about you.  Not one thing.  I know I’m off in the head too but that’s why we click.  I mean, I’m wired weird in my own way, right?

MARLA:  You know what I find wired weird about you?

MARLA:  You wake up each morning happy.  You make coffee and sing made up songs but I like that, it’s nice.

SCOTCH:  Everybody’s weird but nobody wants to admit it.

MARLA:  …You never told me that before…

SCOTCH:  Holy sh’t, it’s like a burden lifted off my shoulders.  Been wanting to tell you for weeks now.

MARLA:  You really love me?

SCOTCH:  I do really love you.

MARLA:  No one’s ever told me they loved me before.

SCOTCH:  Not even family?

SCOTCH:  No other guy in your life ever said those words to you before?

MARLA:  Umm…nope…not once.  I think my dog Newman would have told me he loved me if he could speak but I guess that don’t count.

SCOTCH:  …How does it sound?

SCOTCH:  When I tell you I love you, Marla.

SCOTCH:  Wow, there’s a lot of great songs out there, though.

MARLA:  This song is different.