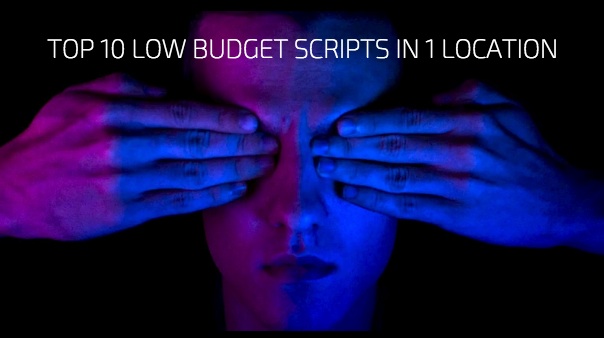 Are you on a shoestring budget?  Here’s a list of the Top 10 Low Budget Scripts In 1 Location to give your creativity a boost.

Making a film project is never going to be easy.  If you can remove as many obstacles prior to production, such as multiple locations, multiple characters or multiple shots, you will be able to maintain a low budget project if money is tight.

In order to help you out, we’d like to share with you a few scripts that take place inside of one location and that have a minimal amount of characters.

We hope this gets your creative juices flowing as the scripts shared are free to use for all non-commercial work.

MIXED MESSAGES
Brothers Joss and Vesco are fleeing a crime and arguing over what should have happened.  Most of the action takes place in a van and the second part of the script takes place just outside the van.

THE LOSS OF FIFI
Sandra is in hiding after a group of gangsters killed her talking dog.

GHOST OF RICHARD
Alexis was forced to marry Oscar despite being in love with a missing soldier.

WAY OF THE WIFFLE BALL BAT
Jane tries to save her son Blake’s life as he chokes on a sandwich in their living room.

YOU ARE SAFE NOW
Davey has fled his abusive relationship with his boyfriend and seeks shelter with his one true friend.

OTHER SIDE OF THE OCEAN
Ava and Tucky are two people in love who are completely innocent to life as they journey towards marriage.

TRASH TALK
Silene is looking for another reason to bail out on a new relationship but maybe the problem goes deeper than she realizes or cares to admit.

LESS SOAP, MORE BLOOD
Roma has become the most famous soap commercial star of her generation, the only problem is she feels like she’s in a nightmare.

TRUE BLOOD TIES
A daughter visits her father in prison and does her best to keep the ongoings of the outside world’s truth from him.

SHRIBBLE
Frank and Valerie have gone vegan and Frank is having a meltdown over the torture of not eating what he loves.