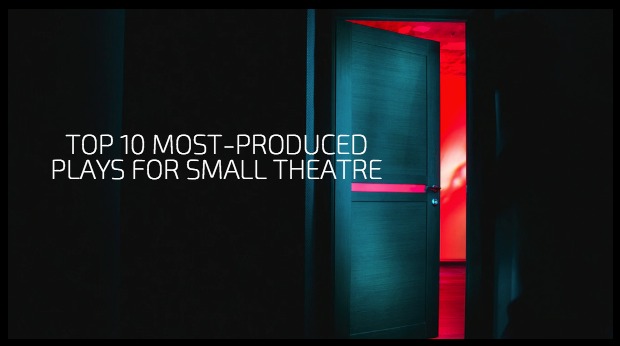 Here’s the Top 10 Most-Produced Plays for Small Theatre which are the most frequently performed short plays by community black box theatres.

These are short plays based on Monologue Blogger’s inventory that go up for stage productions regularly.

WASTED TALENT
Donnie goes back in time to try and make peace with his best friend’s suicide.

PROTECTIVE SHIELD
Rita finds herself becoming vulnerable by discussing the fact that she doesn’t know how to connect to people emotionally.

COFFEE TABLE
Melanie is a psycho ward patient who has conversations with people who aren’t really there…or are they?

READY, AIM, AIM!
Rose is fed up with Vint peeing on the bathroom floor next to the toilet and acting like it’s okay.

SHADOWS OF MY MIND
Naomi opens up to her Aunt about a circle of depression she suffers from within her life and her Aunt responds by shedding light from her own life experience.

AT THE PARTY
Tom is proud of himself for having gotten even with a family member, only to discover that he may be the cause of something tragic.

PAY ATTENTION
While riding backseat in a taxi, Linda finds out that her boyfriend has been cheating on her with her best friend but her driver may be able to help her emotionally.

BURDEN OF BEING TAKEN
A soldier named Baker comes home from a war and and tells the story to his parents about how he lost a friend.

TOAST OF BROADWAY
A melodramatic play about two people trying to overcome their addictions in order to pursue their dreams together.