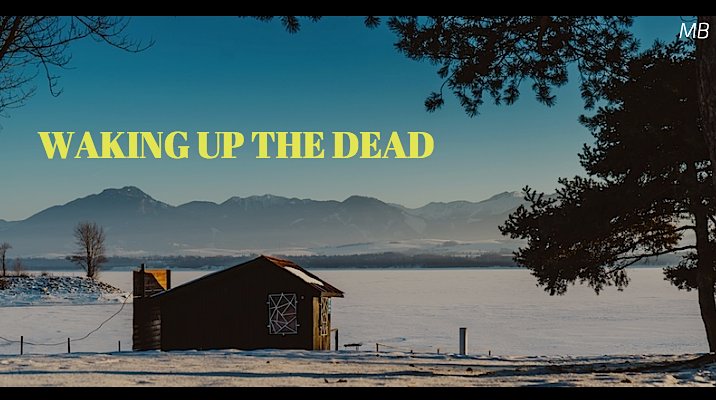 Waking Up The Dead is a dramatic scene with three actors with twists and turns and takes place all in one location.  Scene runs up to ten minutes.  3 people.

Waking Up The Dead

Wilma: My mind is racing.

Wilma rises and looks out the window. A couch blanket is wrapped around her shoulders. She sips her tea.

A murmur is heard from a cot . This is MOSS.

Wilma sits back at the table.

Wilma: When he comes I don’t wanna be here.

Bugley: …When he comes it’s best you and I step back to the shed.

Wilma: I can’t see his face.

Bugley: We can’t go out now, we’ll freeze to death.

Moss motions and lets out a whimper. ‘Mmmaaamma’.

Wilma stares at him.

You need to get focused.

Wilma: I am focused.

Wilma: I’m as focused as a heart attack.

Bugley: Good. It’s the only way this is gonna get done…it’s been long enough.

Bugley: We’ve been through this before. Just like a woman, always waking up the dead. Never allowing the words that were spoken to rest.

It’s been long enough. Quit it.

Bugley rises and gives a stern look at Wilma. Bugley looks out the window.

Wilma joins Bugley at the window.

Bugley: (pointing) Right there. Just past them trees closest to the river. Is that right?

Bugley: Must be moments off.

Bugley: Can’t be exactly sure though. Could be a deer.

Bugley sits back at table. Wilma remains staring out window.

Wilma: I ain’t ever gonna have peace of mind.

Bugley: Damn it woman. This was our decision. We can’t go back on our word, especially to Bronxon. He doesn’t mess around.

Wilma: It’s not too late.

Bugley: Are you out of your gorge? I’ve already paid the man.

Wilma comes back to the table.

Wilma: He can keep the money. What difference does it make?

Bugley: One more word outta you about this and I’m likely to ask him to take you too.

Wilma: You would, wouldn’t ya?

Bugley: I’m just sayin’. When things get rowdy in life, all options should be on the table.

Wilma and Bugley look at one another.

There stands Bronxon Leel Rudenbacher who prefers to go by his middle name Leel.

Leel: I prefer to go by my middle name.

Bugley: Okay then. Leel, come on inside.

Leel: No. I’m gonna finish my smoke. When I’m through I’m coming in for the boy and I”ll be gone. Leave the door unlocked.

Bugley: Okay. You want tea or anything I can get ya?

Leel: This a restaurant?

Leel: Then shut the hell up and mind the door…

Leel spits out a large lungie.
When Leel looks up he notices Wilma. They lock eyes. Bugley closes door.

Bugley: Alright. That’s that then. You ah, you wanna head out to the shed this way we’re not here for it?

Bugley: What’s that you said?

Wilma: You heard me. I ain’t going to the shed. Gonna stay right here. Ain’t nothin’ worse than waking up from a dead sleep and not recognizing your world.

Bugley: Woman have you lost your mind? You’ve pushed me past my patience. I’ve been tolerating your ass all day long. This is it. He is here. It is happening. There is no last minute changes. It’s now. Forever and ever.

Bugley: Hell, no. We ain’t gonna make a scene. You had a nice soft goodbye and it don’t get better than that.

Leel heads straight for the boy.

Bugley: Now, now Leel. Hold up one second for us, please. We just about to leave. We don’t wanna be here.

Leel observes Wilma who is flushed and fighting back tears.

Moss motions another murmur. Wilma places her hand over her mouth, eyes bulging.

Bugley: Go on. We just gonna slip on out the back.

Bugley grabs hold of Wilma and pulls her in his direction. Wilma resists and Bugley grabs her violently by the neck and forces her to exit the backdoor.

Wilma is heard crying out in the distance.

Leel: (to himself) I don’t care one way or the other. Hey! (Leel taps the head of Moss) Wake up half man.

I said—(gun shot is heard)

In comes Wilma holding a shotgun and aiming it at Leel.

Wilma: Don’t go near my boy.

Leel raises both his hands.

Wilma: You’ve now been hired to bury Mr. Bugley. The boy stays with me.

Leel: I had a hunch but I’ll be damned, I didn’t think you had the nerve.

Wilma: Go on. Please leave. Do whatever it is you do and be gone.

Leel: You got me mixed up in a wrong bag of tricks.

Leel: But I’ve been paid to do a specific duty. A deal is a deal. I go back on it, word gets around that Bugley is dead and his son still alive and kicking, well, that makes me look bad. I don’t like looking bad…to no one.

Wilma: What do you suggest?

Leel: Let me take the boy and do my duty.

Leel: I see you with that gun but I’m not so convinced.

Wilma: Sir, please don’t make me blast a giant hole through your tiny brain. I caught the bug.

Wilma and Leel stare into one another.

Wilma: You sure will.

Leel: Bury your own problem.

Leel leaves out of the front doorway.

You come back around these parts I’ll be waiting for ya.