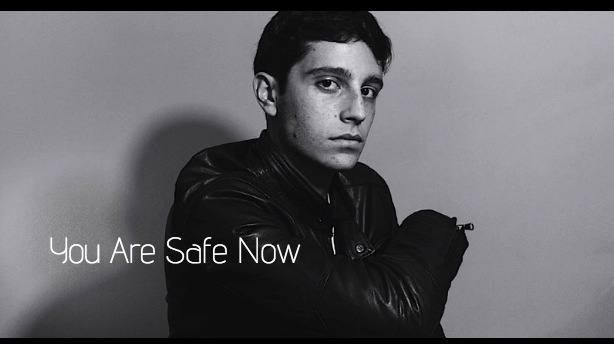 In You Are Safe Now, Jenny comes to Davey’s aid after a physical break up ensued with his boyfriend.  They meet at a park and try to work things out.

You Are Safe Now

DAVEY:  Thanks for coming to see me…I’m really not right…

Both Jenny and Davey sit on a bench.

DAVEY:  Just give me a second to…(sighs)…trying to get myself together here…

JENNY:  Take your time, I think I have some water.  Here!  Take this, drink this.

Davey drinks from bottle of water and breathes deeply.

DAVEY:  I’m okay.  I’ve been keeping so much in for so long, I have no control, just wants to pour out.

DAVEY:  I’m glad you’re here.  Can’t tell you how I literally have no one else in my life that I can talk to about any of this.

DAVEY: I’ve been getting beat so bad.  He is out of control.  His temper tantrums have gotten so horrific…he can’t get upset without getting physical.  I’m so afraid of him.  I’m petrified to be near him.

JENNY:  He did this to you?

DAVEY:  All these marks on my arms are from today…my neck, he was…the back of my head, I’m still shaking.  When he went into the other room I fled.  I ran straight out the front door.  That’s why I look like this…I grabbed everything as fast as I could and ran.

I love you so much, you hear me?  Don’t worry, we will get this figured out.

DAVEY:  It’s over.  There is no way in hell I am staying with him.  He is a crazy person, I don’t know who Ronnie is anymore.

JENNY:  We should call the police.

DAVEY:  I knew you would say that and I don’t want to do that.

JENNY: You need some form of protection.

DAVEY:  I need to get all my things cause I’m moving out.  I’ve been throwing out bits and pieces of my belonging, things I can part with and do without.  I’ve been doing this for months and months and I barely have anything left but my clothes and a few sentimental items…I want out.  I’ve been real sneaky about the whole thing cause I just knew, I knew this bitch was gonna put his hands on me again and I even found a real estate agent who is helping me…listen, I need a week, maybe two, please, let me stay with you, just until I get myself set up in a new place…I’m not even looking for anything special, a studio, a box, I could care less, so long as I am away from Ronnie cause he, he is going to kill me…

JENNY:  Shhh, shhh it’s okay, of course you can stay by me baby, of course.  I’ll talk to Jacob and he will understand.  Jacob loves you anyway so you know he probably wouldn’t even want you to leave.

DAVEY:  I love that guy.

JENNY:  It will be the three of us and we will party until you find your place.

DAVEY:  I feel like I am leaving a terrible chapter in my life but that I have a chance now.  I don’t know what I would do without you being my friend.

JENNY:  Davey, you deserve so much better honey and I promise you that your next chapter will be a beautiful one.  I knew things were rough between you guys but I had no idea it was like this and I feel so guilty as a friend for not seeing it.  I’m so sorry I failed you.

DAVEY:  How can you see what I wouldn’t show?  All I ever wanted was to be like you and Jacob.  You two are such an inspiration to me.  I wish I could have that…I wanted it so bad that I’ve stayed with Ronnie for so long and now look what’s happened…

JENNY:  You will have everything and more.

JENNY:  Give me your phone.

JENNY:  (answering)  Ron?  This is Jenny.  Davey is with me now.  I know what you did to him and you are a disgrace.  You need help.  We are calling the cops and Davey is coming by one last time to gather his belongings.  It’s over.  If you ever try to see Davey or hurt Davey ever again, I will have some people come after you that you really don’t want to meet.  Are we clear bitch?  …Good.

Jenny hangs up the phone.

Davey, do you want to go and get your things together?