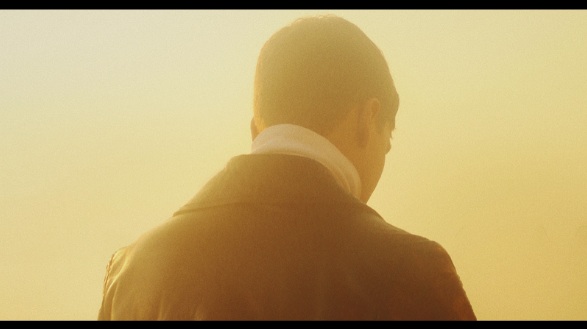 In Each Slow Dusk, Benjamin seeks shelter in a cabin during a heavy rainstorm but everything isn’t as it seems to be.

(speaking to Mae – the woman who owns the cabin)

BENJAMIN: (clears his throat, sips tea) Mmm..lovely. I was gettin’ a bit of the sniffles, but this fire here and this tea will warm me right up, I’m sure of it. Thank you.

(looks out the window)  It’s comin’ down quite hard, but it doesn’t matter the elements. I’m a bounty hunter. Bet you never would have guessed it. (chuckles) Well, true to form I am. Not by passion, just by trade. Got one a them wailers tied up in the wagon not too far off from here…got ’em chained up kinda good so he won’t be goin’ nowhere and I sure weren’t gonna play no sittin’ duck in this storm with ’em; listening to ’em wail about how he’s afraid of lighting and thunder and all. Weren’t my idea of a good night if you catch my drift. Been doin’ this line a work far too long to have to listen to grown men moan about their misfortunes. I left ’em a bottle of whiskey. Sulk by himself. Least I could do. Hell. I’m getting’ a pretty penny for hauling his ass in anyway. What difference does it make if I give away a cheap bottle a whiskey, eh? (beat) Another time I was haulin’ in a former soldier turned rogue who had a rotting wisdom tooth. He’d be cryin’ out to the moon each time the wagon wheels went over a big enough rock..finally, I took mercy on ’em and poured a bottle of whiskey down his throat…tied my fishing line to his tooth and gave him a good yank..out it came, black and gray all over..rest of the ride into town was pure bliss; even though they hanged his ass not six hours after. (beat) What’s a lady like yourself doin’ this far out in the woods alone on a night like this? 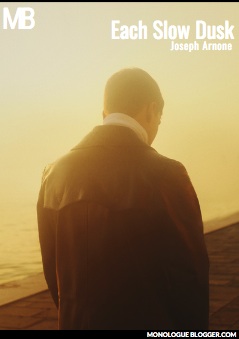 In the one act eplay Each Slow Dusk, Benjamin seeks shelter in a cabin in the woods during a heavy rainstorm.  All isn’t as it seems.  1 Woman, 2 Men.  Drama.