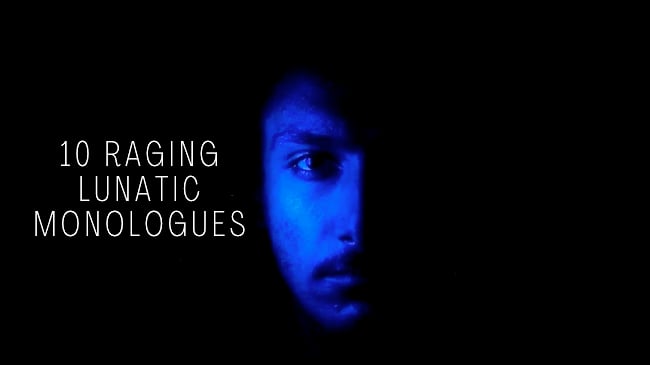 10 Raging Lunatic Monologues offers up some hostile, intense and some very crazy ass characters you can rage with at your next audition.

Timed at 1-2 Minutes long and covering topics such as crime, finance, affairs, revenge and more.

DARK PLACE
Jeffrey lost his mind but receives a visitation form a friend while cooped up in a mental asylum.

HULLABALOO
Maggie is deeply distressed over her son who spent the previous night in the slammer.

COFFEE TABLE
Melanie lives in a psycho ward talking to people that aren’t really there but what if they are?

KILLING YOU
The killer and the victim play a life or death game of cat and mouse…who will be the victor?

MR. BAD MOOD
Bill manages a watchtower and has been slowly descending into madness.

VOICES IN THE TREES
Marina goes off on her family for always criticizing and judging her.

MORE WAYS THAN ONE
Porterfield has been blamed for just about everything that could go wrong at school but his principal may have mercy on him.

JASPER THE WHALE
Charlie is at the end of his rope and in his final throws of life, talks to his best friend which just so happens to be an ironclad sculpture of a whale.

LAND OF THE FORGOTTEN
George was once a successful architect with  wife and daughter, but now he is a homeless man living in the past.