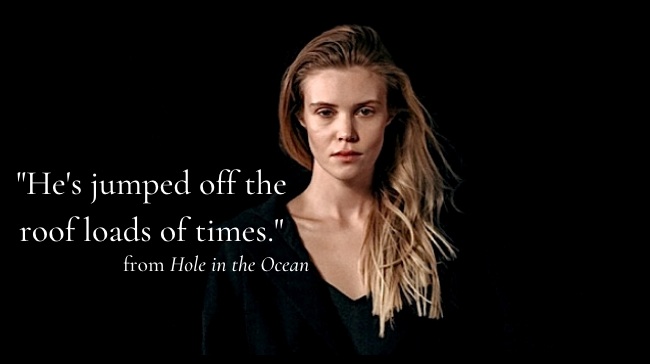 A surrealistic, absurd, dark humor scene from a 1 act play about love and happiness in, ‘Hole in the Ocean’.

PEGGY and HARLEY sit on sofa and drink tea.

PEGGY: So tell me about Stanley.

PEGGY: Ruth? Who the hell is Ruth?

PEGGY: Is she beautiful?

HARLEY: But she’s great in bed.

PEGGY: Remember when I used to hit you with the wooden paddle?

PEGGY: How I thoroughly enjoyed beating you, dearie me. One of my greatest pleasures in life.

HARLEY: I’ve always wanted you to be happy mother.

PEGGY: Oh, I’ve been happy, happiest when most violent. I devour violence. Blood, guts, the whole nine yards. You understand.

HARLEY: You need that in your life in order to function.

PEGGY: Exactly, exactly, dearie me. Ever feel like you want to throw yourself off a roof?

PEGGY: That’s because you take after your father. Gregory is all me. He’s jumped off the roof loads of times. 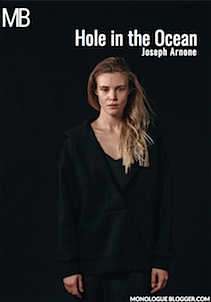 In the one-act eplay Hole in the Ocean, Peggy and Harley can’t seem to come to terms with the source of their unhappiness.  2 women, 1 man.  Drama/Absurd.