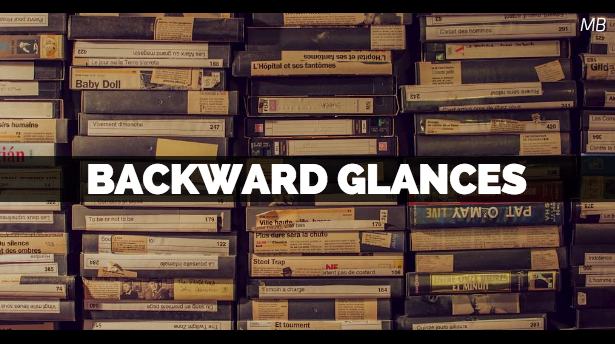 Backward Glances is a short dramatic scripted scene for 1 man 1 woman that takes place in one location with a running time of approximately 10 minutes plus.

LONAR sits at a small round wooden table.  He plays solitaire.  Drinks his beer and smokes his cigarette.

There’s a knock at the door.

Lonar takes a big swig of his beer and motions to open the door.

Carmela stands.  A woman dressed in a throwback to the 1980’s.

Lonar grins and walks back to his chair.

Carmela enters the trailer home and sits on the couch.

CARMELA:  See you’ve moved up in the world.

Lonar uncaps a beer and hands it to Carmela.

Carmela begins thumbing through a pile of VHS movies inside a duffle bag.

LONAR:  Found a huge stack of ’em on the strip next to a dumpster.  Decided to take ’em…thought of you.

CARMELA:  Thought of me, huh?

LONAR:  Well, you know…I figured you’d want ’em, considering you’ve never made it out of the eighties.

CARMELA:  These are pretty good.  I don’t have most of these, except for one or two.

CARMELA:  You want a few bucks?

LONAR:  Can’t a guy do something nice?

CARMELA:  Depends on the guy.

CARMELA:  That’s for sure.

LONAR:  How’ve you been these days?

CARMELA:  Nah, I quit that dump.

LONAR:  Good for you.  I couldn’t stand—

CARMELA:  I know, I know, you were right about him all along.

LONAR:  I should have kicked the shit out of him when I had the chance.

CARMELA:  It doesn’t matter anymore, does it?

CARMELA:  I almost got lost, trying to find you.

LONAR:  I told you I’m just an extra thirty miles out.

CARMELA:  Felt like I’d never get here.  Thought maybe I passed you.

LONAR:  You found me.

CARMELA:  …I actually need to get back, sorry.

LONAR:  You didn’t even finish your beer.

LONAR:  Let me carry this out to the car for you.

LONAR:  What’s wrong with you?  Let me carry it.

Lonar grabs the duffle bag forcefully and walks out of the trailer.

Carmela follows him outside to her car.

Lonar places the duffle bag into the trunk of the car and slams the trunk shut.

CARMELA:  How’ve you been feeling?

CARMELA:  Lonar…how have you been feeling?

LONAR:  Some days better than others, Mel.  This is life.

LONAR:  I’m fine, really.  (beat)  Don’t start that worrying shit cause you know I hate that.

CARMELA:  You have too much pride.

LONAR:  What do you want me to say?  Take pity on me?  Is that what you want—

CARMELA:  Why can’t you admit you need help?

CARMELA:  That’s not what I heard.

LONAR:  What did you hear?

CARMELA:  I’ve heard some things through the grapevine, okay?

CARMELA:  You know, you live this big isolated life.  You think no one sees you or hears you but people in this town know everything about everyone.  You can’t run and hide.

LONAR:  But what did you—

CARMELA:  That you are in fact losing your battle.

And I know these VHS tapes weren’t found.  I know you went and bought them from Joe’s Vintage Shop.  He told me because I practically live there and you know I live there so don’t bullshit me.

LONAR:  …I needed to see your face…

CARMELA:  Why not invite me over?

CARMELA:  You could call me anytime.

LONAR:  I’m…I don’t want to give you problems.

LONAR:  You should get going now, anyway…the sun is coming down and you will just have enough light to make it out of here in one piece.

Carmela kisses Lonar on the lips.