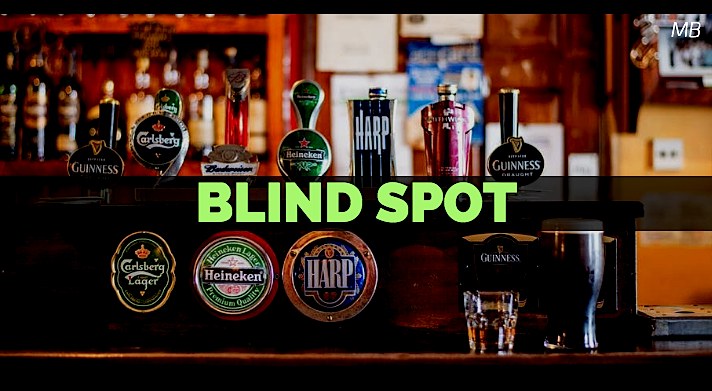 Blind Spot is a serio-comedy script based in Galway, Ireland.  Mícheál enters the pub and stands in front of Father O’ Connor, staring.  5 plus characters.

Father O’Connor: What do you keep f*ckin’ starin’ at?

Father O’Connor: I don’t do confession at the pub. We need to be in a house of God fer that!

Father O’Connor: Well, go to another priest. I’m off duty.

Mícheál: Father you’re the only one I can trust.

Mícheál: I only need a minute or two of your time and I’ll be done.

Both men walk outside to the back of the pub.

Alright, out with it.

Father O’Connor: Out with it boy, I ain’t got all day!

Father O’Connor: What’s that you said?

Mícheál: I smacked me mother.

Father O’Connor smacks Mícheál up against the brick wall.

Mícheál: Alright, alright! Jesus Father, I come to you for forgiveness of my sin.

Father O’Connor: There are things that the good Lord advises me to handle a particular way!

Mícheál: Father! If you just listen to me, please.

Father O’Connor: The only one who can forgive you is your mother! You are despicable. I don’t ever want to see the likes of you again!

Mícheál: Father, please, wait! You don’t understand. There was a prowler come into the house during the night and I fought him off me mother but in the midst of the fight she was smacked a lick from me own hand. It was meant for the prowler but it caught her instead and now she thinks I deliberately smacked her when in fact I would never do such a thing. I love me Mother. I’d never raise a finger and that’s for any woman that is.

Father O’Connor: That’s for making me smack ya for no reason. Why do you come for forgiveness?

Mícheál: For the accident of it, of course. (beat) Am I forgiven?

Mícheál: Well, that’s just it. We can’t find her.

Father O’Connor: What do you mean you can’t find her? Where has she gone?

Mícheál: When the police came to take the prowler, she was gone. I couldn’t find her. Me whole family is out there looking.

Father O’Connor: Have you spoken to Ned Finley?

Mícheál: I’m looking for him, too?

Father O’Connor: He’s inside the pub.

Mícheál: Is he now?

Father O’Connor gestures for them to go back inside the pub. There sits Inspector Ned Finley.

Father O’Connor: Ned, we have a situation.

Ned: What situation is that?

Ned: (To Mícheál) How did you loose your mom?

Father O’Connor: The stupid bstrdd smacked his own mom and she ran off in shame.

Ned: Ya smackin’ you’re mom around?!

Mícheál: No, it ain’t true! Chrissakes! Father tell him!

Father O’Connor: He smacked his own mother but claims it was a blind spot.

Father O’Connor: Said there was a f*ckin’ prowler on the loose. There was a squabble and the mother caught one.

Doyle: What’s this I hear about the schmuck hittin’ his ma?

Mícheál: For f*cksake, ya know! I ain’t hit me mother and the next bstrd that wants to hit me for hittin’ me ma, is gonna fight to the death.

Father O’Connor: Pipe down! (to entire bar) He hit his mother by mistake is all…supposedly.

The entire bar of men sigh and go back to their seats.

Mícheál: Just wanted to ask if you can help me family find me mom.

Mícheál: But you’re the Inspector.

Mícheál: We need your help.

Ned: Well it’s a tough and hard sh’t ain’t it, boy?  Go back home and wait for your mother and apologize for what you done. I will come by later to check up.

Mícheál: Can you put a word out there to the other Garda?

Ned: Are you telling me how to do my job?

Father O’Connor: The boy’s just a little confused is all Ned. Run along now Mícheál. Listen to what Finley told ya. We’ll all do our best to find your mother. Surely, she can’t be that far.

Mícheál: I’ll do what you said Father because you’re the Father but I want to find me ma.

Father O’Connor: Say two Our Father’s and five Hail Mary’s on your way back home and straighten it out with your ma.  I’ll put a word in with the good Lord on your behalf.

Out comes Mícheál’s Mother from behind a door.

Mother: I’ve given that boy a good start.

Father O’Connor: He’s all worked up.

Mother: That will teach him.