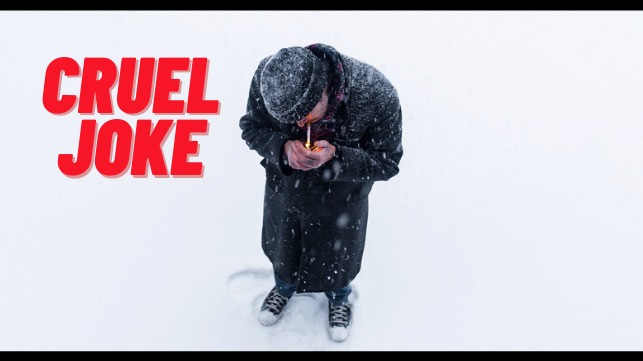 Cruel Joke is a short comedy/crime script about two small time crooks who await further instructions to pull their next job.

PAT and VIN stand by the garbage can fire pit warming their hands and body.

PAT:  This f’n freezin’ our asses off.

PAT:  Hate doin’ jobs in the wintertime.  I’m much more of a summer crook than a winter crook, ya know?

VIN:  Do scores down there.

PAT:  I thought about it.

PAT:  Ah…f’n do down there man?  Sweatin’ my balls off each job.

PAT:  Not when clothes stick.

PAT:  But still.  Always hot.  Some change in the weather is good, don’t get me wrong, but not like blizzards and sh’t.  Can’t be bothered in this.  My eyeballs frozen up.  Can’t even blink when it gusts.

PAT:  Keep that thing away from me.  Like a dead rat.  It smells.

PAT:  You get that sweaty heady whiff.  I borrowed your hat once, many winters ago, and the entire time I had it on my head I smelled ass.  Had no idea where it was comin’ from, was drivin’ me crazy.  I was sniffin’ everything around me, ass.  And then it dawned on me..I sniffed your hat and gagged.  Your ass all over my hair, drippin’ down my forehead, buried in my nostrils, disgusting.

VIN:  How do you know it wasn’t your own ass?

VIN:  I don’t smell either.

PAT:  Yes, you do.  You can’t detect it cause you’ve grown immune to your own scent.  It’s been with you your whole friggin’ life.

PAT:  Ask anybody to smell your hat and I guarantee they will gag.  Wanna bet me?

VIN:  I never thought about washin’ my hat.

PAT:  Ya hat looks like it curled up in a ball and died on ya head.  Like it died from years of sweat, ass and neglect.  Throw it out.  Buy a new one after we do this job.  Please.  Really.

VIN:  This was my Great-Great-Grandfather’s winter hat.

PAT:  That’s like a hundred and fifty years of hereditary ass.  That’s how long and far that distinct odor has traveled.

PAT:  I rather freeze to death than pollute my brain.  Surprised you haven’t caught a fungus.

VIN:  I haven’t been sick since I started wearin’ this hat as a kid.

PAT:  He’s good, alright.  We was walkin’ right passed here the other night and he started sniffin’ in this one spot, right where you’re standin’, actually and he starts clawing at the snow with his paws and starts makin’ this weird worried sound in his throat and waggin’ his tale and barkin’ and I look over to what he found and inside this hole he pulls out a RAAAARGH!!!!

VIN:  You f’n ass….gonna give me a heart atttack in the dead of winter.

PAT:  That wasn’t even scary.

VIN:  Made me jump outta my skin.

PAT:  Was a puppy.  Must have gotten lost or somethin’.  It was skin through the bones.  Terrible.  Cute little face.  Yeah.  Wish I woulda seen it beforehand.  I woulda taken it home with me.

VIN:  Whatch ya do with it?

VIN:  Just leave it there?

PAT:  I told ya, he was (looking around) OH, right here, in there, have a look in there…(pointing)

VIN looks down where PAT is pointing.

VIN:  Is there a dead puppy or not?

PAT:  Nah.  No such thing.  Tryin’ to pass the time over here.  It’s freezing, remember?

PAT and VIN go back to standing by the garbage can fire pit warming their hands and body.

PAT:  You know not for nothin’ but it’d be nice if Gene actually gave a damn about us.

PAT:  How many times has he left us out in the cold like this?

VIN:  He woulda been here by now.

VIN:  You know the rules.

VIN:  I rather be waitin’ in Florida over a barbecue.

PAT:  You’re too young for Florida.

VIN:  Yeah, but…always scrapin’ by, right?  Never an extra dollar to feel like I can do things.  Not that I even wanna do anything but it’d be nice to feel like I could if I want to, ya know?  Ever have that feeling like?

PAT:  …One time I pulled this jewelry store in Brooklyn and I don’t know, I was kind of a green thumb on the job but the guy I was with took a likin’ to me and was really experienced and so he brought me on and I made out pretty well…that was a good time, but you know, things dry up, then they get wet, then they dry up again..it’s the life.

VIN:  Maybe I could do somethin’, ya know?  Learn a craft.  I like workin’ with my hands.  Was thinkin’ Florida, find some furniture makin’ job.

PAT:  Did you say furniture makin’?

PAT:  Give ya six months you’ll be back up here lookin’ for the fast work.

VIN:  Gotta uncle down there…he’s retired now but was a carpenter; figured he can give me a lead.

PAT:  Thought you was happy.

VIN:  What the hell is happy anyways, right?  We never realize it when we are happy, like truly realize it until we’re absolutely miserable and that’s usually when we realize we was happy before…all I know is that I’m not as happy as I could probably be, so…I mean, I don’t think I’ve ever really been happy Pat, like ever in all my life.

VIN:  Was thinkin’ about it…