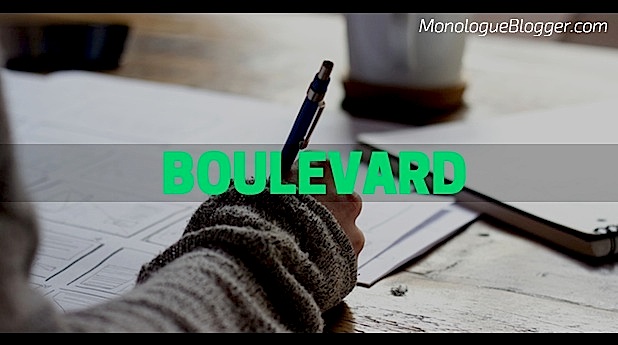 This is a short dramatic scene between a MOTHER and her daughter KELLY.  Both characters do not see eye to eye but yet have valid points and perspectives.

Mother: When you gonna stop all that nonsense and get yourself on a path to success?

Kelly: What are you talking about?

(gesturing to her daughters notebooks)

Mother: This.  All this stuff.  Where is it going?

Mother: You’re old enough to get a job and start helping us.  You’re father’s been out of work now for two months and not once have you offered to help out.  Even a part time job, something to be part of this family, instead of locking yourself up in this room dabbling or doodling or whatever it is that you do.

Mother: Writing.  Writing doesn’t pay the bills around here.  Starting tomorrow I want you hitting the boulevard and finding some sort of work.  Get a job. You’ve lived stress free for sixteen years.  I’ve had it.

Kelly: I’ll see about getting something at the sandwich shop.  Frida has a job there, maybe she can get me something a couple days a week.

Mother: I will have a go at you anytime I desire.

Kelly: I don’t want to hear it.  I’m in the middle of something and I already said I’ll go out tomorrow to find a job.  What more do you want from my life?

Kelly: I am!  What do you think I’m doing by writing?

Mother: Do you even know how to make any money from it?

Mother: So why bother?

Mother: I liked dancing when I was your age.  Didn’t mean I was going to be a ballerina!

Mother: I’ve read your stuff, by the way.

Mother: Your so called writing.  I’ve read it.  I didn’t like it.  You’re much better off going to school and working your way up to something.  Too much of this writing—

Kelly: How can you do that to me, when I’ve already told you to stay out of my things!

Mother: Don’t you dare take that tone with me.

Mother: But it’s about me.  It’s about your dad, your brother…all of us!  You don’t think I can read between the lines of your writing.  How can you do that?  How can you say such horrible things about all of us?

Kelly: It’s not about any of you.

Mother: Oh no.  What about the one where you talked about how your father slapped me and nearly broke my nose? Your story is exactly like what happened!  What kind of writer is that?

Kelly: It’s a fabrication…I have to write from my life but I turn it into something from my imagination.  Something you will never understand.

Mother: Sounds like I can’t do a damn thing in my own home without you writing something about it.

Kelly: Are you done?

Mother: Stop writing about this family and about our personal lives.

Kelly: That’s not what it’s about.  It’s hard to explain.

Kelly: You won’t ever truly understand.  I’m different then you are.

Mother: What are you an alien species?  Cut the crap.

Mother: I’ll leave you alone.  I’ll be waking you up nice and early tomorrow morning.