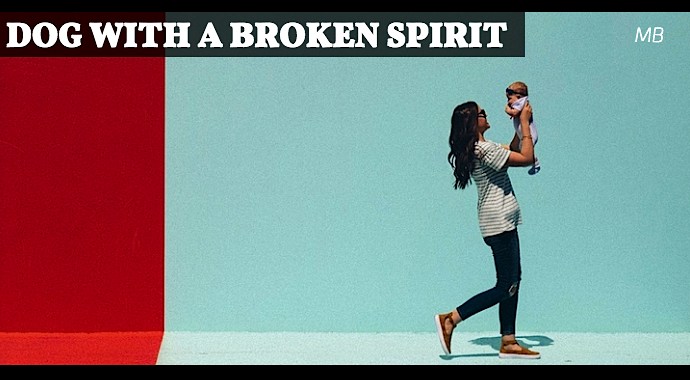 NICOLAS leans against the frame of a wall holding a bloodied handkerchief to his lip. SASHANE sits on couch clutching her bag on her lap.  It’s 2 a.m.

Dog With A Broken Spirit

Sashane: Let it bleed till it dries up.

Nicolas removes the handkerchief, sticks out his face.

Sashane: Don’t press down on it so hard, let it try to scab.

Nicolas: It won’t scab cause too much blood keeps coming out of it!

Sashane: You’re such a baby.

Nicolas: I got my lip busted open for you and you call me a baby.

Sashane: You chose to get your lip busted open. Wasn’t my fault.

Nicolas: I wasn’t blaming you.

Nicolas: No, I’m glad I got my face punched in some. Brought me back to feeling things…I couldn’t feel anything for so long and now, hell, I’m so full of feeling I love it.  You shoulda let them boys beat on me more.

Sashane: Why? Why?! To show how tough you are? That you can take it? When you ever gonna grow up? Being with you!

Nicolas: I am grown up! Defending my woman.

Sashane: But you didn’t have to. I handled it and you had to make a fuss.

Nicolas: I didn’t like the way he was smiling at you. Just so, so damn ugly is what it was. Ugly ass charm.

Sashane: I handled it perfectly. You think guys don’t always try me? I be walking’ anywhere and there’s always some man out there wanting to try it with me.

Nicolas: Why’d you start smiling back at ’em?

Sashane: Because that’s how you have to be with men. I smile so nothing comes of it.

Nicolas: What’s gonna come of it? How?

Sashane: I’m sayin’ that if I am not somewhat kind in my response than things can get ugly.

Nicolas: Girl, what the hell are you talkin’ about? Things DID get ugly. They got ugly as hell.

Nicolas: Damn, you get me so anxious! That guy mock reached for your ass and he was smiling from ear to ear with his gap teeth and then he followed you walkin’ all the way back to me and he gave me a look.

Nicolas: It was a ‘Oh, she’s with that loser’ sort of look.

Nicolas: It was like a ‘Oh screw that guy, I’m better than that guy, what she doing with such a putz’ sort of look.

Nicolas: I didn’t like it! He pulled my trigger. He could have let it go, not me.

Sashane: YOU needed to let it go. This is what I mean. You always think you’re right. You refuse to see the bigger problem. You don’t know how to grow up and be mature. Be a man for christsakes!

Nicolas: A man? What? Man?? I wasn’t man enough taking on four men by myself in that sh’thole pub?

Sashane: It’s not about being physically tough. I’m talking about something else..

Nicolas: I don’t want to forget it. I can’t understand it if—

Nicolas: So if I sat on my stool like a dog with a broken spirit, that would have made you happy?

Sashane: You won’t get it.

Nicolas: I wanna get it.

Sashane: (sighs) You know, my father was just like you. I always thought I’d be with a man who was refined, polite…a guy who held himself together and didn’t easily break over the slightest of things. My father was always with the hands. You know? Everything was a back hand or a front hand with him because he never knew how to communicate with words or let things be. He was always fighting. Always raw and animalistic…you don’t, I don’t want you to be like my father was…I hate that way of being…making a giant fuss over tiny issues…why he dropped dead of a massive heart attack at fifty-five. Found him coming home from school, right on the stairs to our house…coffee mug still in his hand…you know this!  I promised myself and here I am. Will power just as weak as my mothers. I’m with you Nicky because I saw something different…I know you have those rough edges and all but there’s a softness in your eyes that makes me believe, that made me take a chance on us…I’m starting to think that you won’t be able to smooth out those edges.  When you gonna, I don’t know, when’s it gonna happen Nicky?  When?  You put up this whole tough guy syndrome and it’s fake…it’s not really you.

Sashane: …Why die for someone if you don’t have to die for them?

Nicolas: …Seeing those fellas flirting with you was dirty to me, the way they were going about it…was so dirty and you brought it back to me and I had to let those losers know that that’s not how they should be as men. They shouldn’t go around like that towards a woman and they shouldn’t think they have the right—

Sashane: But we were having a pretty chill night together, weren’t we?

Sashane: I wish I never went to the bathroom but I was dying to go. I blame myself.

Nicolas: You did nothing wrong. (pause.) I don’t know how to be calm in situations like that. I feel like a chicken sh’t if I even feel for a second that someone’s taking advantage of my world and I don’t protect it.

Nicolas: But I’d know. Inside myself. I’d know I did nothing. Goes against my truth.

Sashane: No. It goes against your pride and you need to learn to let that sh’t die. I rather your pride die than you…

Nicolas: I don’t know how to be that way…don’t you think I try. Damn it! I try all the time I try! You know, I get it figured out and I feel good for awhile and I don’t get myself worked up over things, those tiny things you say, and I like that I can just about get a handle on that sh’t, it’s slippery as hell but I keep grabbing for it and I get it but when things like tonight happen, my blood, I feel my blood boil in my neck and a heat wave comes over me and I start foaming from the brain and I want to just grab those bastards and bite their faces off until they know what they doing is wrong! It’s injustice! How are these, these monsters gonna know if someone stronger doesn’t show them? HOW?

Sashane: Yes, it’s good to feel what you feel but wrong on how you show them. If you would have turned your back on those guys and kissed me instead, I bet that would have showed them. I’m your girl, ain’t nothin’ gonna change that but you.

Nicolas: You won’t look at me differently, like I’m some sort of bitch?

Sashane: The cave man days are over Nick…they should’ve been over a long time ago.

Sashane: You ain’t a cave man but tonight you acted like one.

Nicolas: So if I sat on my stool you wouldn’t have been mad at me for not—

Sashane: I already said no. It’s the opposite, what I want from my man. The opposite is what I need and what I find truly attractive. I know that’s you Nicky…just be you. That’s all I want for us. You be you and I’ll be me and together…that’s three?