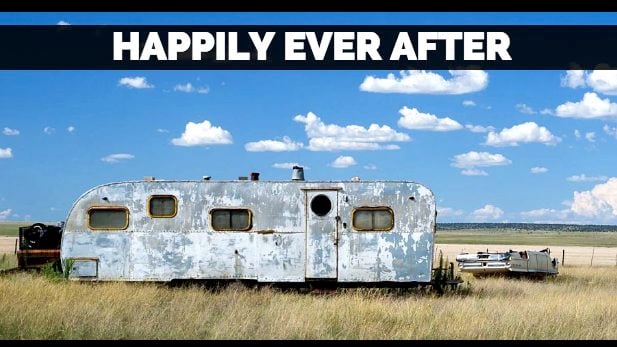 In Happily Ever After script, Reeve visits his father Phil at his trailer home out in the desert.  Phil is in a wheelchair and unshaven.  Reeve is tall, slender and wears a suit.

REEVE:  I can’t say I wasn’t expecting a different reaction, not a smile, a grin or a grunt…How do you do that?  How do you continue through life without ever feeling anything?

Where do you put it or maybe you’re just immune to having anything meaningful in your life…I come out here, I travel all this way, out in this hot and lonely desert, to see if you’re still breathing cause you won’t answer your phone.

PHIL:  My phone is disconnected.

REEVE:  I know your phone is disconnected.

REEVE:  Getting on alright?

PHIL: Until you showed up.

PHIL:  Thought you said you was going?

PHIL:  There’s a can of beans somewhere in the cabinet, have a go.

REEVE:  You know they came looking for you again and bashed up all my storefront windows.

PHIL:  (laughing)  That must have set you back some.

REEVE:  I don’t have the money to pay your debts, Phil.

PHIL:  I don’t have any debts.

PHIL:  Thought you told them boys I died.

REEVE:  I did tell them you died and now they are holding me accountable for your gambling.

PHIL:  I meant the boys…

PHIL:  You tell them?

REEVE:  No, they don’t think you died…

PHIL:  You grabbing those beans cause I’m hungry?

Reeve grabs beans out of a cabinet and peels open the top.  He finds a spoon and hands the can to his father.

REEVE:  Better than you.

PHIL: Why don’t you borrow money from her?  She married a rich guy, didn’t she?

PHIL:  You won’t borrow money…too much pride and ego.

REEVE: I’m not like you, I won’t go around selling my a** to the highest bidder.

REEVE:  Live like this?!  How did you allow yourself to become what you are?

PHIL:  And what exactly did I become?

PHIL:  I don’t seem forgotten.  My debt collectors appear to remember me quite a bit.

REEVE:  You don’t stress, do you?  How do you sleep at night?

PHIL:  I learned a long time ago that stressing only leads to more stressing and I used to do so much stressing that one day I woke up from bed and said NOT TODAY and a change came over me and the change was so powerful that I realized I was happy when I let go, so, there you are, I’ve been flying ever since.

REEVE:  You are ruining my life and you don’t care a damn!

PHIL:  Look, you have your own life and you shouldn’t worry so much about mine.  As for those debt collectors, well, just tell them that I’ve resurrected…give them my location and let them come to me for the money…I’ll deal with them.

REEVE:  They will kill you, Dad.

REEVE:  Even in death you are selfish.

PHIL:  I don’t need to answer to you.  It’s my life.  You didn’t bring me in this world but you cannot say the same, can you?

REEVE:  Don’t you give a damn?

PHIL:  I already explained it all to ya.

REEVE:  I’m not going to be responsible for killing my own father.

PHIL:  You can’t be held responsible.

REEVE:  Yes, I can.  If I tell those scum where you’re located, they will without question, end your life.

PHIL:  And everyone will live happily ever after.

PHIL:  Can’t you for one moment of your life be like me?  Stop being so goody goody like a little school boy trying to get perfect grades.  Skip school for a day!  Damn!  You have my DNA in ya, there has to be something of me going on in there that will allow you to throw your hands up and say screw the old man, he ain’t never done sh’t for me my whole life, let him get what he deserves…right?  Don’t you hate me enough to throw me to the wolves?  And if you don’t, you should by now or you’re too stupid to realize you mean nothing to me, never have and never will, or your kids, whatever there names are, I can give a damn about the whole freaking lot of ya, so why don’t you get the hell out of my trailer and don’t look back before I throw this here can of beans in your big, idiotic face.  You with your high morale and belief system of doing the right thing…GET THE HELL OUT OF HERE I SAID!!!  And don’t ever come back.  You tell those sons of bitches I’m waiting for ’em tooth and nail.  You tell ’em!!

Reeve leaves the trailer.  Phil watches him from the front door.

Reeve gets in his car and spins off.  He hits the breaks and gets back out of the car.

PHIL:  You said that already, didn’t you go to school to think up some more adjectives?

PHIL:  …Are you serious?

REEVE: I don’t know what to call you anymore?

PHIL:  How about a terrible father?

PHIL:  A piece of sh’t human being, who never cared about anything other than drinking, gambling and women.

PHIL:  Should I keep going?

PHIL:  …You wanna do a shot of tequila with me?

Phil rolls down the outside ramp to the trailer with a bottle of tequila in his lap.

Phil hoists the bottle up to his son.

Reeve uncaps and takes a large swig of it.

PHIL:  There you go…there’s some of me in you after all…

Reeve hands the bottle to his father.  Phil takes a large swig as well.

Both men stare out at the horizon.