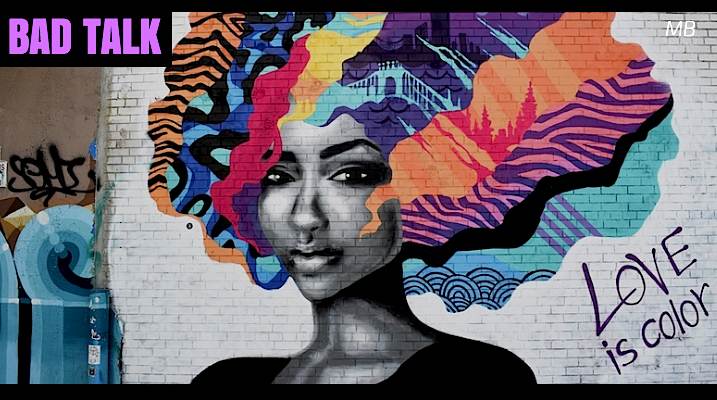 DIZZIA and BIV are chilling out at the corner store.  They’re good friends.  Along comes YOCO, who is the neighborhood crazy.

Yoco: Hey, why you always bother me for, huh?

Yoco: When I pass through here’s. Why you always talkin’ shit on me for?

Yoco: Yo see? Now you sayin’ it to my face when you always sayin it behind my face? Why you do that for?

Dizzia: Well now I’m sayin’ it to yo face.

Yoco: Why you do that?

Yoco pulls out a knife.

Yoco: Why you do that?

Biv: Yo, chill son, just chill. Nobody wanna give problems.

Yoco: She call me dumb.

Dizzia: You is dumb.

Yoco: Why you talk that way for?

Dizzia: I ain’t afraid of you.

Biv: Yo! Let’s chill! Yo man, nobody wants a problem. Just keep walking. The po-po just passed here. They be driving around the block. Gonna pass on through in a hot minute.

Dizzia: I ain’t about to apologize. Whatch you gonna do with that nail clipper?

Dizzia: You ain’t cuttin’ nobody.

Yoco: I come back we friends?

Yoco: From now on?

Dizzia: This boy is whack. Yeah, okay, we friendly, I don’t know about friends.

Dizzia: Just, yeah man, we can be friends. Arright? You good now?

Yoco: Thanks.  No more bad talk.  Only good talk. Happy.

Biv: Yo, nobody gonna say bad talk about you no more, playa. We good. Just don’t go pulling knives on people. Ight?

Biv: What the hell was that yo?

Dizzia: He be starin’ at me all the time!

Biv: Yo, we should report him.

Dizzia: Nah, police already know about him though.

Biv: Dizz, he pulled a blade on us.

Dizzia: It’s all good. He wasn’t about to do nothin’.  He acts dangerous but he ain’t.

Biv: He pulled a knife.

Biv: I don’t need that dude rolling up on me.

Dizzia: I got you.

Biv: You ain’t got shit.

Dizzia: Are you serious?

Dizzia: Can I tell you something?

Biv: What you say?

Dizzia: Cousin. That damn fool my cousin. He just don’t know he my cousin cause he too stupid.

Biv: Are you kidding me?

Dizzia: Why would I say it?

Biv: How’s he yo cousin?

Dizzia: On my dad’s side. My Uncle’s son.

Dizzia: He ain’t even supposed to be out at this time.

Biv: I can’t believe the neighborhood crazy is your cousin.  (beat)  I’m sorry.

Biv: He doesn’t recognize you as his cousin?

Dizzia: Nah. I see him all the time but it don’t stick. Maybe that’s why he’s always starin’ at me when I see him in the street.  He can’t place me in his mind.  It frustrates him probably.

Biv: I won’t say nothin’. I feel bad though.

Biv: Ya own cousin pulled a knife on you. I mean, you should tell your Uncle then.

Dizzia: Yeah. I don’t know. I tell him but he’s, he’s not good that way. He’s always beatin’ on him.

Biv: On your cuz?

Dizzia: Yeah, we even think my cousin got problems cause he took too many hits to the head when he was young. It’s a long story.

Biv: What about your Auntie?

Dizzia: My Auntie’s dead.  (beat) He harmless though. He ain’t ever hurt nobody before.