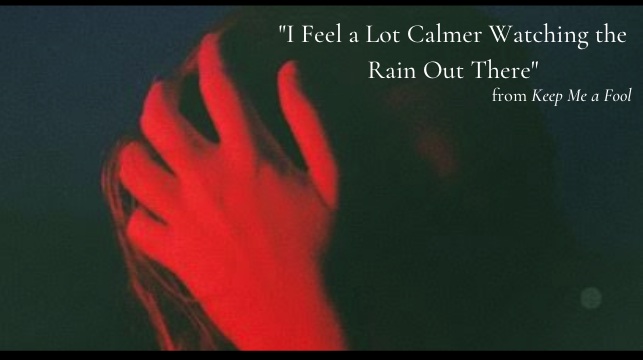 In this scene from play Keep Me a Fool, novelist Fiona seeks understanding with her fiance, after having parted with her longtime publisher.

FIONA:…I feel a lot calmer watching the rain out there…it’s how my mind has been these last few weeks…like a violent rushing waterfall. And all those dreams I had, vivid. And remember those parallels, there were so many of them Julian but I only mentioned a few to you, don’t you think they were strange? They’ve still been bothering me, not so much as before but sometimes I just want to shut them all out…just want to be left alone. Why is it, that no matter what we do, no matter how much we all will ourselves to focus on our endeavors, life still finds a way of trying to intrude between all these things? I think I’ll try to write again, now that I’m feeling better…(Pause.) I was thinking about that film we watched the other day…wasn’t it beautiful? Cinema can be so perfect, can’t it? I wonder what it was like to be that actress, what do you think she was thinking in that ending scene? There was something about the look in her eyes, I couldn’t quite understand it..I couldn’t figure it out…

Julian is halfway in his own thoughts, reading from his notebook on his desk.

JULIAN: (Looking down at his notes.) Not sure…why don’t you read tonight? You just spent almost a month’s earnings on books last week. And you haven’t taken them out their boxes yet. (Pause, he looks up at Fiona.) Fiona..? (No reply. Fiona appears distracted again, looking out of the window.) Fiona are you listening to me?!

JULIAN: Why are you always doing that?

JULIAN: Ignoring me. I’m asking you…where are we going to put all these books?

FIONA: Oh. I don’t know, we’ll – we’ll fit them in the kitchen, in those cupboards…

JULIAN: Okay. I’ll let you take care of it when you can. Just don’t leave them in those boxes like that for days. You’ll end up forgetting about them, mistake them for trash or something…

FIONA: No. I wouldn’t do that.

JULIAN: You would if you end up forgetting about them.

FIONA: (Slightly disturbed by this.) Why would I do that?

FIONA: Since when have I treated literature like sh’t?

JULIAN: Not implying that you do.

Fiona gives him a look…

FIONA: Not the one who sold our books…

JULIAN: Let that go, will you.

FIONA: It is true though, isn’t it?

FIONA: The fact that you sold those first editions.

JULIAN: Stop. Don’t start up again with me on that, we’ll get those books back. (Julian reverts his attention to the papers of notes on his desk.)…You’ve mentioned it enough times already.

FIONA: But why did you do it behind my back?…I don’t know where you’re looking but I’ve reached the finding, that some of those books we’ll never see again…

JULIAN: I had to sell those books because we didn’t have the money at the time. I sold my camera too. And I sold pretty much everything we had.

Julian and Fiona exchange looks, both are willing to put up a fight if neither backs down. Fiona senses this and resorts to composing herself.

FIONA: Oh well. I wish we had money then, even if it was just enough to have gotten us through…

FIONA: After all these years.

JULIAN: We got through it, didn’t we.

Fiona walks to the kitchen counter and pours herself a glass of red wine. Julian holds out a glass and she pours him one too. She goes back to sit by the windowsill, Julian walks over to the couch nearby.

FIONA: We would have done things differently back then, if we had the money.

JULIAN: ..Wasn’t our time then.

FIONA: (Subtly sarcastic, slightly laughing to herself.)…Yes that’s funny isn’t it? Life’s timing. (Steadies herself.) The wine’s good, thank you for getting it.

JULIAN: What exactly would we have done different?

FIONA: What exactly? Probably everything Julian. (Pause.) …You remember that first night? When we tried all we could to be together but we couldn’t afford the night off or the train fare. We would have met on the beach that night, I would have followed you there, without anyone in the world knowing, we would have avoided all those months of separation. To think of it, we were probably better off being poor, money makes you do stupid things. But it’s sad when I look back…we wouldn’t have fought the way we did if we had money. Right? All those horrible fights we could have avoided. (Fiona goes quiet.)… I was so young then…and those fights.

JULIAN: You weren’t easy to deal with Fiona.

FIONA: Yes I know, I know. But, isn’t it sad when something taints love? Love should be left alone. 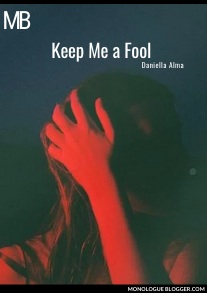 Keep Me a Fool is a one-act drama, following the story between novelist Fiona and her Fiancé journalist Julian. It has been weeks after Fiona has parted ways with her longtime publisher and editor Arnold Boldini, causing an indelible impact on her work, her mind and course of actions, leaving her questioning life and love.  1 Woman, 1 Man.  Drama.