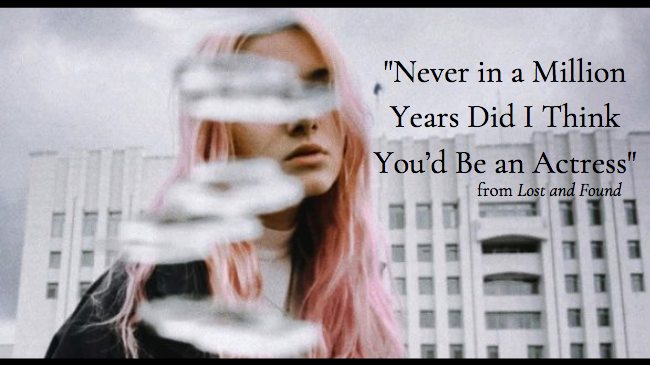 In this drama scene for two teens from the one-act eplay Lost and Found, Jarla tries to help Kimmie figure out her career path.

KIMMIE: Never in a million years did I think you’d be an actress.

JARLA: Well, I wouldn’t call myself an actress—

KIMMIE: You are, you are, you’re going to be a famous actress. Watch! I already know it.

JARLA: I don’t know if I’d ever wanna be famous Kimmie. I saw a documentary once about these movie stars and they all seemed so miserable with their past lives…so much, complication. I don’t want my life to be that complicated, I just want to see where this new journey takes me.

KIMMIE: I wish I could find something like you.

JARLA: What are your interests?

KIMMIE: I don’t have any…

JARLA: Take a second and think. What do you like?

KIMMIE: …Um…uh, I like design. I’m always looking at home design. Does that sound stupid?

JARLA: Why not try getting into designing stage plays for the drama department?

KIMMIE: Stage plays? I don’t know the first thing about that.

JARLA: Just take what you know about home design and you can apply it to set decorating. You know, make the scenes on stage come to life.

KIMMIE: Never thought of that. But oh that sounds amazing! I did see a Broadway production with my Mother once, it was like stepping into another world. It’s hard to believe that there are even..opportunities for something like that…I mean, there’s actually a set decorator for the stage?

JARLA: Yeah, who do you think does the job? Someones gotta do it! Just imagine you could do all the designs. Like if a play takes place in the 1950’s, you could be responsible for decorating the living room, kitchen and stuff, to give that 1950’s look and feel.

KIMMIE: I never knew about this. Who do I talk to for that?

JARLA: Mr. Martin. I heard he’s also looking for help building and designing the sets and you can go in as a set designer.

KIMMIE: Sounds like I’ll be in over my head.

JARLA: No, no, come on Kimmie! You said you want to do something different, well this could be it! I’ll go with you to talk to him. It’s a place to learn, you won’t be expected to be some expert, but you can see if it suits you, it may be something you can imagine yourself taking more seriously.

KIMMIE: I don’t know. I don’t think I have the mind for it.

JARLA: That’s just the fear talking but as Tommy would put it, you have nothing to fear, life is short enough as it is, what’s the point in waiting for something to happen? If Mr. Martin has a position available, this could be just what you needed… 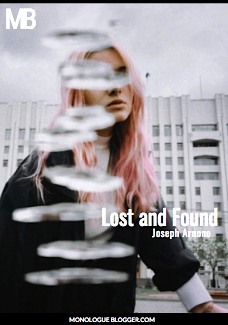 In the one act eplay Lost and Found, Kimmie is trying to come to terms with who she is as a person after the painful loss of a friend named Tommy.  2 Women.  Drama.  Coming of Age.