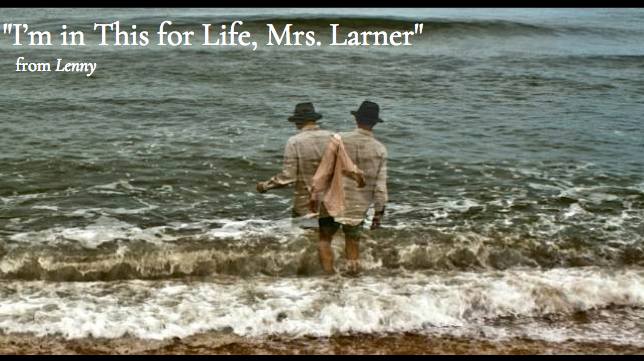 Lenny is a scene taken from the one-act serio-comedy eplay Lenny, wherein a man is trying to come to terms with his identity and happiness.

LENNY: After all, I’ve made the commitment to myself, I’m in this for life, Mrs. Larner. When you ask me if I should give up, you know, it doesn’t make any sense to me. It’s not something I can imagine doing.

MRS. LARNER: Even if it means your life?

LENNY: Yeh, well…even if it means my life.

MRS. LARNER: Have you, Lenny, have you thought of what kind of pain you’re willing to endure?

LENNY: Sure I have.

MRS. LARNER: But there’s no alternative for you?

MRS. LARNER: It seems like you’ve made up your mind.

MRS. LARNER: Well, what do you expect me…I mean I, I can’t help you much more, Lenny. I can’t really do–

You were better than most Mrs. Larner, I wouldn’t of had anyone else.

MRS. LARNER: What more advice can you expect me to give?

LENNY: None. I don’t expect a word, you’re so hung up on trying to say the right thing, so you say nothing at all. If there’s any truth to it, I can understand that. Perhaps live with it, even. Remember we had that conversation? You helped me then, that day, when you said that I shouldn’t expect a damn thing, I made that a ‘life’ thing, I said I’ll never expect a thing from any goddamn person ever again. I made that clear to myself. And if that’s the only thing I can be proud of, then so be it!

MRS. LARNER: Leave the check on the table.

LENNY: Oh I will. Don’t you worry about that, Mrs. Larner. And I’ll leave here, as quiet as a mouse, because what else can I expect from you?

I left it there that night, on the side table of her office. Like I’d done every Thursday for the past eight weeks. She wasn’t as useless as I made her feel but she was damn right cold for making me leave that way.

In the one act eplay Lenny, a man searches for his identity and place in the world, with the help of his therapist Mrs. Larner.  1 Woman, 1 Man. Drama/Serio-comedy.