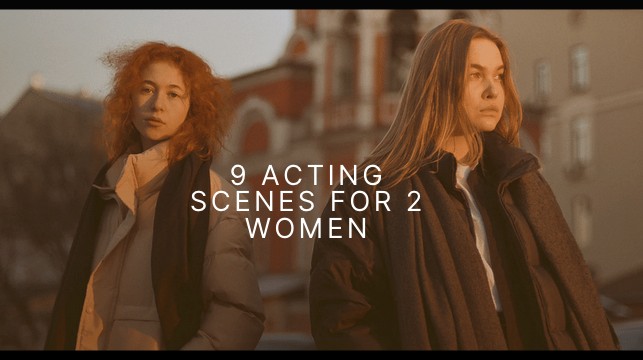 9 Acting Scenes for 2 Women offers actors scenes from plays that may be used for drama class, practice, demo reels or video uploads.

The scenes listed here are for two people and are from our selection of one-act plays.   You will find both drama and comedic pieces.

MAYBE YOU’RE HAVING A MENTAL BREAKDOWN OF SOME SORT? (from the eplay Ice Cream from a Window) Drama.
Cathy has been hiding her inner turmoil from her family and friends.  One day while meeting her friend Barbra at an ice cream parlor, she begins to leak her emotional baggage out in public unexpectedly.

I DON’T WANT ANOTHER DUMB ARGUMENT (from the eplay Four Summers Ago) Drama.
Two sisters have finally come together after years of not talking.  They try to resolve their problems but each one has their own strong point of view.

YOU ARE FAR FROM SOBER GIRL (from the eplay Day Follows Night) Drama.
It’s early in the morning after suffering from a bad night…Tyra reaches out to her best friend for help.

AREN’T YOU GOING TO TRY YOUR EGGS? (from the eplay Treat Me Nice) Drama.
Corinne is always hard on her daughter but thing have reached a point where her daughter can’t take her intensity any longer.

SOMETHING IN THE MACARONI AND CHEESE BOWL MOVED (from the eplay Fungus Among Us) Comedy.
Alexa and Mara go into overdrive mode when they make the surprising discovery that something may be living inside their refrigerator.

HE LOOKED ROUGH AROUND THE EDGES (from the eplay Rather Be A Man) Comedy.
Pam and Kim dissect their relationship to men and discuss the good, bad and ugly.

I’M NOT THE NEEDY TYPE, RIGHT?  (from the eplay Phone Calls)  Comedy.
Meagan met the man of her dreams a few days ago and he still has not called her when he said he would.  Its been driving her crazy and she expresses all her pent up anxiety to her best friend.

NEVER IN A MILLION YEARS DID I THINK YOU’D BE AN ACTRESS (from the eplay Lost and Found) Drama.
Kimmie and Jarla recently lost a friend to suicide and it has woken them both up to wanting to make something out of their lives.

THOUGHT I COULD MAKE IT OUT HERE ON MY OWN (from the eplay Ache and Moan) Drama.
A runaway teen confides in a street hustler for unexpected advice.