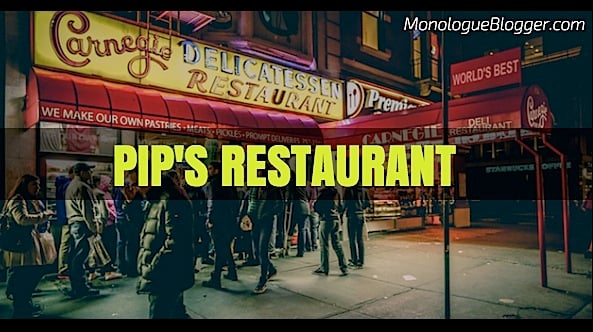 MUGGS has a crush on SHARON who is supposed to meet with him and JUDD at PIP’S RESTAURANT but this tale has a bit of a surprise for good ole Muggs.

Muggs: Every time I ask Sharon to meet me at Pip’s, she never meets me.

Muggs:  Why is it alright?

Muggs: Yeah.  You’re here.  I guess I’m destined to live a life by my lonesome.

Judd: You have Tricksy, haven’t you?

Judd: Sorry, Muggs.  So, you wanna go in and get some sandwiches?

Muggs: I do.  My stomach’s been growling since 2pm.  But I waited, I waited like a gentleman should wait and she never showed.

Muggs: It’s the fourth time, alright?  So what?!  I believe in second chances.

Judd: Yeah but this is number four.

Judd: I was just sayin’.

Muggs: Do me a favor and stop saying.

So, you wanna go get them sandwiches, then?

Muggs: Yeah, I’m hot.  If I get any hotter I’m liable to melt right here, all over the pavement.  How do you like that?

Judd: I don’t like that at all, Muggs.  I don’t want you to melt anywhere, especially right here in front of Pip’s, our most favorite place.

Muggs: …I’m alright.  I won’t melt.  Just sore about Sharon not showing up.  I don’t get it.  Whenever she sees me she’s all lovey dovey.  Always smiling, always engaging me in conversation, always asking me how I am and always throwing hints to hang out.  I give her a shot to meet with me and she’s a no show!

Judd: Thank you, Muggs.  Ain’t no one ever called me special before.  Do you really mean those words?  I’m special?

Muggs: Why, of course you’re special.  You are the most special guy I’ve ever known.  How do you like that?

Muggs: How about that roast beef sandwich?

Muggs: You made it.

Judd: She made it.

Sharon: I’m so sorry I’m late.  I’m just dying to try one of those roast beef sandwiches you keep going on about.

Judd: You came to the right place.

Sharon: I believe I did.

Judd, would you mind going on in ahead of us, I need to have a quick word with Muggs.

Sharon: If you don’t mind.

Sharon: I need to tell you something.  Something personal.

Muggs: Sure.  You can talk to me about anything.

Sharon: Well, you are the only person I can talk to about it.

Sharon: I have a confession to make.  I’ve been meaning to get it off my chest for quite some time and now is that time.

Muggs: Right.  Let me just say that I feel the same way as you do.  For the longest time.

Sharon: I’m not so sure you can.

Muggs: What do you mean?  I’m not capable?  I’m a man.  I got needs.  I know I’m the burley type but I sure as hell am the sensitive burley type.  Sort of like a giant puppy you can play with day or night, anytime you wish.

Sharon: This is about Judd.

Sharon: I’m in love with Judd.

Muggs: Sensitive on the inside…yeah…right…Judd.  Why, Judd?

Sharon: I’m in love with his innocence, his kindness, he is so soft spoken…he has the most gentle eyes I’ve ever seen on any man, I get lost in them…he is such a mild mannered man…do you think he likes me?  I wanted to ask you because I know you two are best friends and all.  It’s why I wanted to speak to you first, so I don’t embarrass myself.

Muggs: Well, Sharon, to be honest, it never crossed my mind…umm, I don’t know.

Sharon: He’s never talked about me to you before?

Muggs: We’ve spoken about you but—well, in passing conversation.

Muggs: Yeah but, I don’t know one hundred percent if you’re his type.

Sharon: But you just said he speaks about me.

Muggs: Yes, no, yes but…I’m getting awfully confused.  Sharon, uh, I could talk to Judd for you, to find out for sure.

Sharon: Okay.  That’s sounds about right.  I truly appreciate it.  But you aren’t exactly sure?

Muggs: Well, Judd is a picky guy and before we jump to any conclusions it’s probably best I speak to  him to be one hundred percent sure you’re his kind of gal and all.

Sharon: What percentage would you say you think he thinks I am?

Sharon…Well, okay.  I trust you Muggs and I can’t thank you enough!  Those are great odds!

(Sharon gives Muggs an huge hug and kiss.  She then darts into Pip’s resturant.)

(Muggs looks on in defeat)