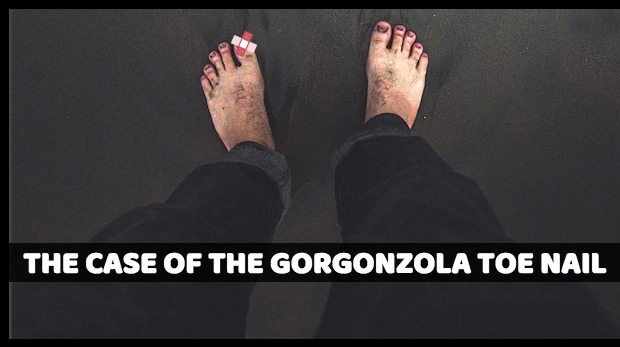 In the short comedic sketch, The Case of the Gorgonzola Toe Nail, Pack inspects and condemns Burpie over stealing and using his beloved nail clipper.

The Case of the Gorgonzola Toe Nail

Large man, tight tang top, prances in the dark and examines Burpie while he sleeps.  He picks up one of Burpie’s feet and examines his toes closely.  “Ehm”.  He puts the foot down.

Pack kicks the side of the bed frame.

Burpie:  Because you told me not to touch it.

Pack:  Right.  So why did I just find it on top of your bureau?

Pack wiggles the nail clipper in front of Burpie.

Burpie:  Someone must have put it there.

Burpie:  Let me sleep man, I got work in the morning.

Burpie: The phantom.  It was The Phantom of the Opera.  Ha, ha, ha.

Pack kicks the side of the bed frame.

What’s wrong with you?!  This bed is the only nice thing I have.

Pack:  Why did you use my nail clipper?

Pack:  Burpie, I know for a fact that you used my nail clipper.

Burpie:  No, you don’t.  You’re just trying to get me to confess by acting like you have some kind of evidence.  I’m not stupid.

Pack:  Burpie, you see this?

Burpie:  What makes you think that’s my toe nail?

Burpie:  What makes you think that’s your nail clipper, anyway?

Burpie:  What makes you think you are the rightful owner of those nail clippers?

Pack:  Don’t play games with me.

Burpie:  For your information, you are holding my Gorgonzola toe nail for no reason other than the fact that you are an inconsiderate man.

Burpie:  I bought one that’s similar to yours because I like the way it cuts, besides, all nail clippers look the same.  So, if you don’t mind, put my clipper and toe nail back on my bureau, get out of my room and let me sleep.

Burpie:  I’d let you use my nail clipper but you’re not allowed.  Go find your own.

Burpie pulls the bed sheet covers over his head.

Pack slowly stumbles to the bureau.  He places the Gorgonzola toe nail and clippers on the bureau and exits.