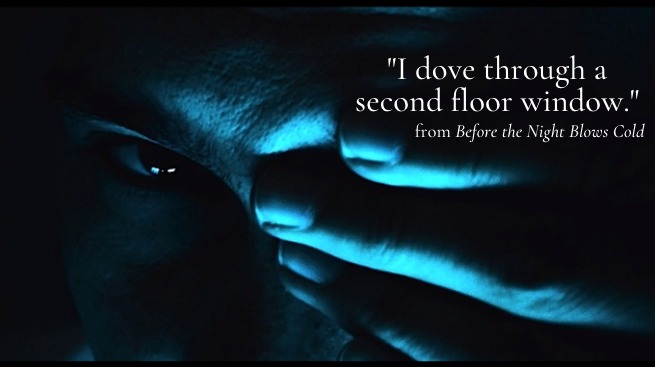 Billy is on the run from criminals and shows up at his ex-girlfriend Azumi’s place to hideout from 1 act play, ‘Before the Night Blows Cold’.

AZUMI: I hate your guts.

BILLY: I hate my guts, too. Least we hate the same guy, right?

AZUMI: Why do you do this to me?

BILLY: I just went on a whole rant about it.

BILLY: It’s worse than that but I figured I’d give you the “stuck on the other side of the door” version.

BILLY: Not trying to be funny.

AZUMI: Why is your face so bad?

BILLY: I told ya I got the shit kicked out of me but escaped. You have no idea. I have some glass stuck in my side here…

BILLY lifts his shirt to reveal a sharp piece of glass sticking in his side.

Need help pulling it out.

AZUMI: How did you—

BILLY: I dove through a second floor window, landed on a pile of garbage pails and got away, but the glass caught me in my side.

AZUMI widens the gap of the door.

BILLY: Place hasn’t changed, but, (pointing) what happened to the couch I bought you?

AZUMI: I set it on fire.

BILLY: It really does. Yeah…ha, ha!

AZUMI: Take off your shirt.

BILLY takes off his shirt.

AZUMI goes into another room.

BILLY: Do you have some of my clothes and shit still here or did you burn those, too?

AZUMI: I burned everything. 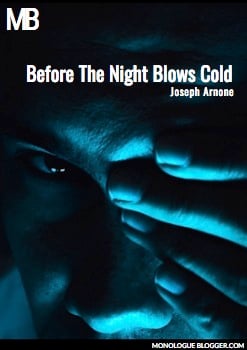 In the one act eplay Before The Night Blows Cold, Billy is on the run for his life and he tries to hide out at the only place he feels safe, Azumi’s. Drama. Crime. Serio-comedy.