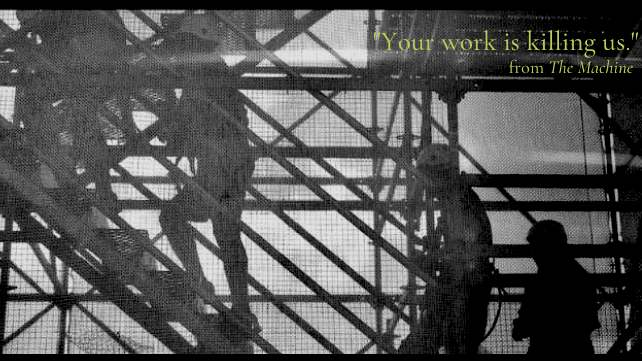 In this drama scene Griffin and his wife Farah are dealing with the loss of their dear friend who died from a work related accident.

FARAH: Your work is killing us.

FARAH: It took Amelio! What’s next? If it doesn’t kill you, it’ll find its way to kill what is left of us!

GRIFFIN: I told you I am going after Friedman.

FARAH: What good will that accomplish?

GRIFFIN: We’ll have him removed, we’ll join forces, all the workers, I’ll get them to –

GRIFFIN: (beat) He murdered the most loyal friend I ever knew.

FARAH: It won’t make a difference.

GRIFFIN: Something needs to be done!

FARAH: What about Jackie and his children?

FARAH: What do you mean you don’t know?

GRIFFIN: There’s no workers compensation, insurance or anything like that.

FARAH: What exactly are you saying?

GRIFFIN: …in those early days you knew just how desperate we were, we both needed the job, they made us sign an agreement that states if we get hurt on the job or die that they aren’t liable.

GRIFFIN: It’s my responsibility to put bread on the table.

FARAH: So Jackie and the children are going to receive nothing?

GRIFFIN: Not a dime.

FARAH: And what’s going to happen to them?

GRIFFIN: (softly) I did it for you and Amber…there’s no other choice.

FARAH: Why are we trapped?

GRIFFIN: All I need is another five years on the job. That’s long enough for us to save up enough money and get the f’k outta here. Right? ..Right? Haven’t we spoken about this many times before? We can’t forget. We can’t.

GRIFFIN: Depends on how you look at it. 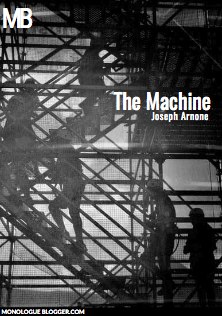 In the one act eplay The Machine, Griffin talks to his wife about what a painful reality his toxic work environment has over their happiness.  1 Woman, 1 Man.  Drama.