While Walt is tending bar, he informs his best customer Bella about her former boyfriend Gene being back in town after his disappearance.  Scene comes from the one-act eplay, ‘Eye of the Whale’.

BELLA: I’ll have another hit of the fine stuff, Walt.

WALT (friendly): Isn’t it passed your bedtime yet?

WALT: This one’s on the house.

BELLA: Should be. Seems I’m the only one keeping your house running.

WALT: …You know…I heard something.

BELLA: Yeah, what ya hear?

WALT: I wasn’t gonna tell ya.

BELLA: Ya gonna tell me or not?

BELLA (teasingly): Life is a bad idea. Get talking.

WALT: That’s what I heard.

BELLA: And is that supposed to be considered newsworthy?

WALT: I only thought –

BELLA: Why would I care about Gene being back in town? You know I thought we had a real friendship going on here for a moment. Telling me about Gene,

Enters Gene, without Bella noticing, from the front door entrance.

BELLA (cont’d): like Gene is supposed to mean something. Ha! If I saw Gene I’d spit right in his face, right between th’ eyes and watch my glob of spit run all the way down to the tip of his nose. The p’k. Don’t tell me about Gene. 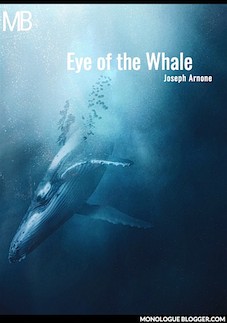 In the one act eplay Eye of the Whale, Gene shows up at his local bar after years of being out of town and out of touch.  While revisiting his past he shares a story about a humpback whale that parallels his relationship with the only woman he’s ever loved.  1 Woman, 2 Men.  Drama.