“How did you find me?” opens up the scene excerpt between a son and long lost father in 1 act drama eplay Checking In.

BILLY: How did you find me?

ROB: We always knew where you was…just never thought to tap you on the shoulder, till now.

BILLY: Right. Well…how old are you?

(ROB downs his beer, hands it to
BILLY)

ROB (cont’d): I just have one question I want to know and I’ll be off. (beat) Why’d you leave us?

BILLY: …I was using.

BILLY: …I was changin’. I wasn’t the same..needed to get away cause the drugs and because I didn’t want you to see me in a different light…I got away…far, far away and I struggled, nearly left for dead once or twice, but I couldn’t tell you how or why but, I continued on the path of destruction, like some rabid dog and I, I wanted to die. I was hoping to give out and one day I was found lying in some gutter. Some elderly man took me into his home and cared for me…musta been some sort of war vet cause he had all kinds of memorabilia around his place and he moved and spoke a certain way, but he helped me, I’m grateful. One could say it was an intervention that I was forced to experience. Ha. He was a tough old b’stard and I’m not about to go into all the torment and torture I endured but I, I prevailed, I got better, I found work, started a new life, opened up this tiny motel here and that’s pretty much my story.

ROB: Why didn’t you ever come back?

BILLY: It’s not that I didn’t want to come back, it’s that I couldn’t come back. Call it a deep level of humiliation, fear of falling back on my old habits…I don’t know…this life wasn’t planned.

ROB: Not even a f’n phone call, a letter, something…

BILLY: …You’re right from your point of view, but if you were sittin’ in my seat you’d see things a bit, well, VERY differently.

ROB: I find it hard that as a man, you could abandon your family, forever. I don’t think I could ever do something like that.

BILLY: I can’t disagree with how you feel, son. 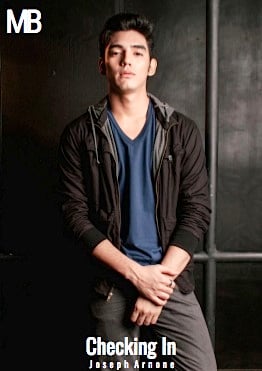 In the one-act ePlay Checking In, father and son meet for the first time since father abandoned son while just a child.  2 Men.  Drama.