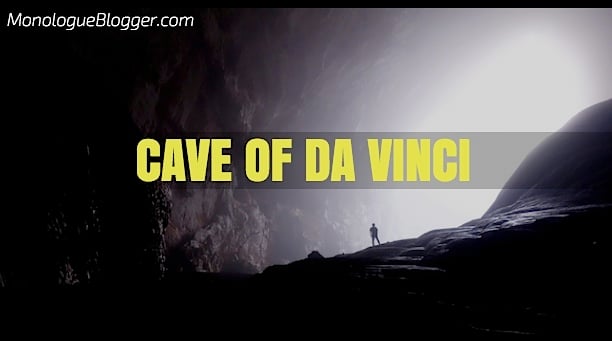 In Cave of Da Vinci, Two BURGLARS enter an apartment.  A man named FREDDY FERRARA is sitting down with a cup of coffee and a gun resting on a nightstand.

Freddy: Hey, boys…come in, relax.  Grab a seat on the sofa.

Do me a favor and take those stupid nylon masks off your face so I can look at you.  What is this the seventies?

There you are.  (beat)  Coffee, anyone?  A buddy of mine gets it sent to him from Cuba and I must say that the coffee beans from there are impeccable.  Such a smooth taste.  Would you gentlemen like a cup of Cuba?

Freddy: Don’t be rude.  Introduce yourself first before answering me…this way I know the proper way to address you.

Tobey: No, thank you.

Freddy: Nice to me you, Jacky Boy.  Coffee?

(Freddy shoots Jack in the forehead and sips his coffee)

Freddy: Yes, yes, I know.  Was it your brother?

Tobey: No!  Oh God please no, no coffee.

Freddy: Okay, okay.  So, what were you boys doing here?

Freddy: You came to this dump for money?  Surely you boys could have stepped up the real estate.  There are plenty of neighborhoods just twenty miles east from where we’re sitting.  That was a mistake, I’m afraid.  (beat) Stop looking at him. He’s dead.  Looking at him isn’t going to bring him back.  Take that throw blanket and put it over him, if it will help you some.  Go ahead…

(Tobey is shaking.  He can barely place the blanket over Jack)

I’ve always been a good judge of character.  Jacky Boy had an attitude straight away and I can’t go in for that sort of thing, you know?  Not where I come from.  You, you are much more polite and well mannered.  It goes a very long way with me.

(Freddy lights up a smoke)

Freddy: Don’t be over polite cause I don’t like that either.  Take a cigarette and calm your nerves.

(Freddy hands him the already lit cigarette and sparks another)

Now, you actually did come to the right place. He didn’t, but you did.  You looking for work?

Freddy: I don’t do no [email protected]* work like you do.  I’m talking about hard work.  You scared of hard work?

Freddy: You remind me of me when I was your age not too long ago.  I was on the run from the mob because I killed some up and coming thug who would cause me trouble all the time at the night club I worked at and one night I just had enough.  I had to skip town for years until everything was worked out.  But during that time I grew as a person, see, I changed…I had to fend for myself in a new land and mature, figuring out how to survive without my brother Richie having my back all the time.  I was completely on my own.  Ten years.  In that time I became seasoned in my trade and my skills.  I got really good at what I do…sort of like when Da Vinci visited them caves for a time and then suddenly came back with all this knowledge.  You follow?

Tobey: I think I do.

Freddy: Good.  Your timing couldn’t be better, actually.  I want to pay things forward and you actually caught me on a good day.  How is it outside, is it nice out?

Tobey: Yeah, the sun is shining.

Freddy: Is it?  That’s great to hear cause I usually go out for my morning walk and skipped it this morning.  I don’t know why…maybe I sensed you were coming.  Anyway, right, I have some work for you and as of now consider yourself fully employed.  Does that make you happy?

Can I ask you a question?

Freddy: You just did.  Why waste a question asking to ask a question, when you should just ask your question.

Freddy: Oh, Jacky Boy, I have plans for Jacky Boy, too.  I’m gonna go to the toilet. I’ll leave you two alone.  Say your final goodbyes, cry to God and all that.  When I get back I will expect you to be here and I will have instructions.  Very specific instructions that you are to follow exactly.

Freddy: You should be.