Marshall tries to figure out how to explain to his father he’s been struggling with his true identity in this drama scene from Maple Road.

JIM: Now, I don’t know exactly what’s going on with you. That’s your business but if what I had to say to you hit the right spot, at least I did something for you. I know we ain’t have much but one thing I can do is try to steer you clear of the same mistakes I’ve made. That’s all I can ever do…pass me your beer.

Marshall brings his father the beer.

Go open another one for yourself. (beat) Get out there…maybe even be a sheriff, one day. Sheriff Mitchell, has a nice sound to it. Get all that hostility out of you and you’d be doing the world a bit of good.

MARSHALL: I hate who I am…

JIM: Keep searching until you find what you like.

MARSHALL: I try, nothing ever changes.

MARSHALL: If I try any harder, I’ll kill myself.

JIM: What you say?

MARSHALL: Nothing, forget it.

JIM: No matter how hard life gets, it ain’t ever worth doing that, you hear me?

I don’t care what it is…ain’t nothing worse than doing yourself in…especially at your age. You have your whole life ahead of you. There is too damn much for you to see and do in this world…you can’t tap out as soon as things get tough.

Hell, your Grandfather went through a depression, a war…he saw everything bad before he saw anything good…he didn’t get through all that hell for nothing. You come from a long line of thick-skinned soldiers and just cause you got a splinter in your toe, don’t make it alright for you to flee the coop.

I been shot to death and come back…my life wasn’t fought on dying, son…you can’t go and think it’s okay for you to dishonor those that come before you.

MARSHALL: I wasn’t trying to dishonor anybody, Dad.

JIM: Not just anybody.

MARSHALL: You know what I mean. 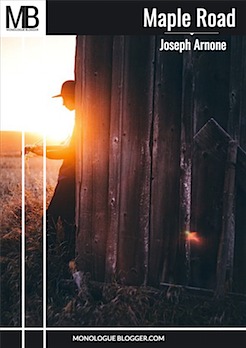 In the one act play MAPLE ROAD, Marshall struggles with his identity and turns to his father, who doesn’t seem to be able to help him.