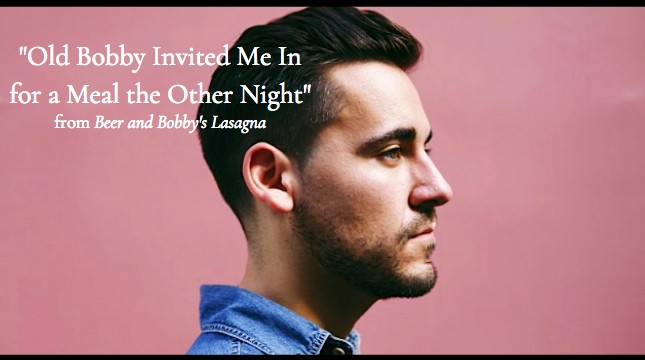 Kutch suffers a bad stomach ache while helping his friend move in this comedy scene from one-act eplay Beer and Bobby’s Lasagna.

KUTCH picks up the box and heads back down the stairs.

KUTCH: Been on the squirts for two days now.

BARRY: What’s wrong with ya?

KUTCH puts the box on the floor.

KUTCH: Old Bobby invited me in for a meal the other night…

KUTCH: Yeah, I was doing fine up until then. I bumped into him while pickin’ up a spumoni in the neighborhood…what are the chances? Just goin’ about my business, but there he was talkin’ about how much weight I’d lost and you know Bobby, he doesn’t stop talkin’, I think he lost it since his last wife Linda died, you know he brought her up too, wouldn’t stop goin’ on about the spumoni they once had in Italy, so I just kept on talkin’ to him and the more we talked, the more we walked closer to his place and by the time I knew it, I was havin’ another meal by his. Worst decision of my life, couldn’t even make out what he was cookin’, I been squirtin’ my brains out since.

BARRY: Shoulda warned you about Bobby, he’s known for that, it’s the lasagna he had, he prefers making it with old ricotta.

BARRY: Yeah, old ricotta, right before it gets mouldy, he’s known for it, thinks it adds more flavor to the lasagna.  Bobby, still killin’ off the neighborhood.

KUTCH: Ahhh, well, thanks for warnin’ me, too little too late.

BARRY: Yeh well, maybe it ain’t just Bobby that is the cause of those issues a yours.

KUTCH: What is it now? If it weren’t Bobby’s famous lasagna, then what could it possibly be, Barry?

BARRY: I’m not a doctor, but maybe it’s all that booze you keep fillin’ yourself up with.

KUTCH: Nah, it ain’t the booze. I get sick if I don’t drink.

BARRY: (laughs) And that’s another thing, you smell. 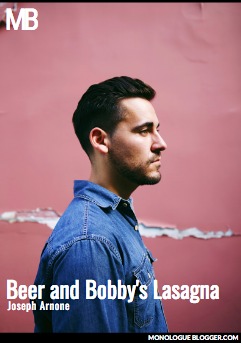 In the one act eplay Beer and Bobby’s Lasagna, Kutch is helping his friend Barry move Mrs. Maple out of her home as a favor, but sometimes good deeds go unappreciated.  1 Woman, 2 Men.  Comedy/Serio-Comedy.